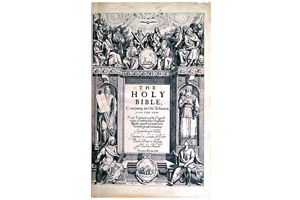 This year commemorates the 400th anniversary of the publication of the King James Version (KJV) of the Bible. Known today for its elegance, the KJV has immeasurably shaped the rhetoric and literary expression of generations of English speakers.

James I of England convened the Hampton Court Conference of 1604 for the purpose of bringing unity among various religious factions that were dividing the English people over the text of the Bible. John Reynolds, a leading Puritan representative, suggested that a new translation of the Bible be undertaken.

Some 50 scholars from three eminent institutions — Oxford and Cambridge universities and Westminster Abbey — were divided into six groups or “companies”; three companies were assigned the Old Testament, two were assigned the New Testament, and the sixth company was assigned the apocryphal books. These scholars commenced translating late in 1604, and their goal was to produce a fresh translation in an English style that would communicate clearly to all the people the message of Scripture and unite them around a common English Bible.

With the companies diligently checking one another's drafts, the manuscript was completed in 1610, and the Bible was published in 1611. First known as the Authorized version, because its authorizing patron was King James I, it quickly became known more widely and popularly as the King James Version.

In this landmark anniversary year, American Bible Society celebrates the historic achievement of the KJV translators and the precedent they set in the ongoing field of Bible translation. This legacy continues to ensure that the message of the Bible affirms the power of God to speak to every generation through the Holy Scriptures.

A Brief History of the English Bible

American Bible Society celebrates the historic achievement of the King James Version translators, who set a precedent in the ongoing field of translation.

ca. 1384
Wycliffe's Bible
John Wycliffe realized that a Bible in English was needed, and under his inspiration the first translation of the entire Bible into English was made from Latin.

1526-1531
Tyndale's New Testament, Old Testament Portions
When church authorities in England prohibited a new English translation, William Tyndale went to Germany where he translated the New Testament from the original Greek. He also translated portions of the Old Testament (Pentateuch, 1530; Jonah 1531). This first-printed English New Testament was published in 1526 and smuggled into England but frequently confiscated.

1535
Coverdale's Bible
Like Tyndale, Miles Coverdale fled to Germany to complete a translation of the Bible. He used Latin and German versions as well as Tyndale's New Testament and portions of the Old Testament. This was the first printed English Bible.

1539
The Great Bible
Largely a revision of Matthew's Bible undertaken by Coverdale and incorporating good contemporary scholarship, it got its name because of the large format used to facilitate church use.

1560
The Geneva Bible
A revision of the Great Bible, with decidedly Protestant commentary, produced by English Puritans in Geneva.

1568
The Bishops' Bible
A revision of the Great Bible, prepared by Matthew Parker and others, served as the base for the revision ordered by King James.

1611
King James Bible
For more than 250 years, the King James Bible was supreme among English-speaking people. During the last century, knowledge from newly-discovered manuscripts, archaeological discoveries and recent scholarship has led to its revision, and also to meaning-for-meaning functional equivalent translations, an approach to translation pioneered by Dr. Eugene A. Nida, a premier linguist and Bible translation theoretician, who worked more than 50 years for and with American Bible Society.

1901
American Standard Version
A modification of the English Revised Version

Photo by David Thorne In February, the Bible Society of India celebrated its 200th anniversary....