RecordAround The World & Arts And Media & In The USA 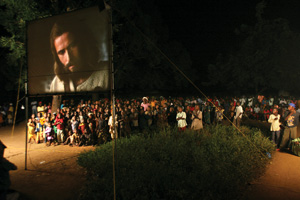 The JESUS film in the Igede language showing in Nigeria.

What if each culture and people group around the world were given the opportunity to hear the story of Christ in their own heart language or dialect? And what if they were not only able to hear it, but also experience it in a way they hadn't known before?

These questions led to the creation and worldwide distribution of JESUS, a 1979 film that was deemed by The New York Times the “most-watched motion picture of all time.” In fact, according to the JESUS film Project's website, the film has been seen more than 6 billion times.

The Script Made All the Difference

Many people are unaware that the film's script was based on American Bible Society's own Good News for Modern Man translation of the
Gospel according to Luke.

Paul Eshleman was one of the original team members with Campus Crusade for Christ International that sought to create the JESUS film.

He says, “What attracted us to [Good News for Modern Man] so much was that it was simple . . . straightforward . . . easy to translate . . . and most importantly, was accepted by both Catholics and Protestants.”

Eshleman says that because this was the foundation, God has blessed the film in every part of the world.

After a modest theatrical release, Campus Crusade for Christ began showing the film internationally by translating the film and showing it locally.


“We had always planned that we would show it in other countries of the world; that this might be a way for people who didn't read or write to learn about who Jesus was.”

To date, more than 230 million people have indicated decisions to receive Christ personally after viewing the JESUS film, and the film has been translated into nearly 1,100 languages and dialects.

“Hundreds of millions have come to know him in a personal way . . . in large part due to the efforts of American Bible Society,” Eshleman says.

Finding ourselves in the Exodus story

Freedom comes at a price. Our nations veterans know this full well as they endure,...