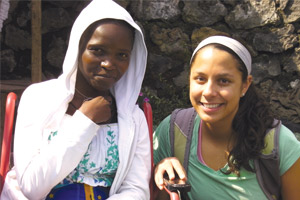 Jenna, a volunteer cyclist on the first She's My Sister bike tour, meets Consolatta for the first time.

Words weren't necessary. Their smiles, their hands touching, conveyed what was in their hearts. Two women from separate worlds, different languages and life circumstances, and yet, they connected instantly.

The threads that connected Jenna and Consolatta as sisters in Christ were in place long before this meeting. Each woman had been on a journey to this moment — emotionally, spiritually and physically.

Consolatta is originally from the Masisi territory in the Democratic Republic of the Congo (DRC), an area ravaged by roving militias. Violence came to her village, and she was forced to flee. While searching for food in the bush, a group of soldiers found and raped her and left her for dead. The trauma of this experience was so severe that she lost the use of her legs, though there is no medical explanation. Sadly, this same kind of story is repeated thousands of times among girls and women of all ages in the DRC.

Jenna Liew first learned Consolatta's story in 2011 when volunteering as a cyclist in ABS's first She's My SisterTM bike tour. She was part of a group of 20-somethings who rode their bicycles thousands of miles to tell the story of what was happening to their sisters in the DRC. This past year, just as the second group of cyclists was gearing up to carry the story forward, Jenna had the opportunity of a lifetime. She joined an ABS staff trip to the Great Lakes Region of Africa to see firsthand what was happening through the She's My SisterTM initiative.

Jenna shares, “I had been praying for Consolatta for over a year. I had seen her face and heard her testimony numerous times. She has been on my heart and mind, and the same goes for all who have been a part of the She's My SisterTM initiative. I knew our meeting would be unique.”

“When we first saw each other at Sister Alvera's facility, Flame of Love, Consolatta and I were both overcome with uncontrollable smiles,” says Jenna. “Though we had never actually seen or met in person, we both already knew so much about one another.

“Before we even began to converse, Consolatta grabbed my hand and placed it in hers. She did not let go. In these moments, the She's My SisterTM phrase had never felt so real to me. Beyond our differing cultures, languages and homelands, Consolatta and I are sisters bonded through our Lord and Savior Jesus Christ.”

Through the She's My SisterTM program, Consolatta has found the love of God. Though physically she is grounded, her heart is no longer weighted with bitterness. Consolatta can now say that she has forgiven her tormentors and looks forward to her future.

Through She's My SisterTM, Jenna and Consolatta's lives have become entwined with the greater story of God's healing love and power. Theirs is now a bond that won't be easily broken.

“Consolatta and the other women of Christ in the DRC have changed my life,” reflects Jenna. “They motivate me to devote myself fully to the purposes of my Creator. They are teaching me how to truly forgive, passionately love and earnestly hope. I want God to use me to change lives in DRC. But it seems that these Congolese people are actually transforming my life.”

Living Water for Victims of Drought

God’s love is felt in Suriname

“It feels as if God is speaking directly to me.”