What One Bible Can Do

A Soldier’s Journey from Pain to Promise 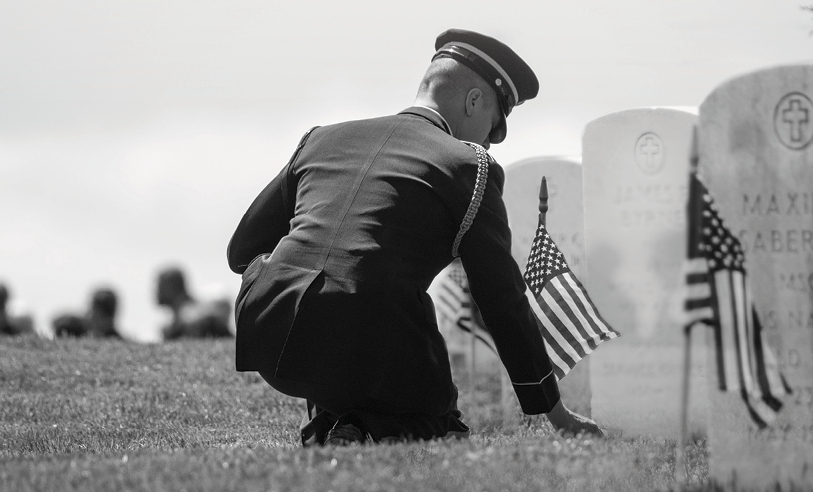 Barely out of high school, a young Chris Runnells decided to join the Army as an airborne infantryman. “I wanted to serve my country as my grandfather had done in Korea,” he remembers.

But Chris’s view of himself, the world, and God was about to change. From school dances and algebra tests to jumping out of planes into combat zones, there was no way to prepare for what was to come.

He left for Iraq. “In my first deployment, one third of my unit were casualties,” he says.

Fellow soldiers—newfound brothers, sisters, friends—were gone. And in some ways, so was a part of Chris. “I thought I had a good grasp on my faith—but after that, I lost all faith,” he says.

It was a season of numbing loss. After losing so many comrades, Chris continued serving his country for five more years—two of which were spent in some of the harshest conditions of war.

The years that followed revealed a different kind of battle as Chris tried to cope with the aftermath of war. Post-traumatic stress disorder. Tormenting memories. Survivor’s guilt. Physical wounds.

Chris reached an all-time low and knew he needed help. Out of options and unwilling to let war win, he decided to meet with his chaplain.

Along with wise words of counsel, his chaplain handed him a military edition Bible, made for Service members just like Chris.

“I felt I had been let down. And I still have difficulty processing that in some aspects. But I’ve come to the understanding that God loves us so much,” Chris says. “Jesus is here to comfort me, and tell me that those things that happened in battle weren’t my fault.”

Chris’s appetite for God’s Word increased. He started soaking up Scripture through a Bible-in-a-year reading plan. He went to church and studied the Bible with friends. He began to realize his brother, friend, protector, and comforter—Jesus—had never left his side.

“It has been a process that has taken well over 10 years of understanding,” Chris says. “Now I know I’m never alone; I always have Jesus with me.”

Through his journey of healing and discovery, Chris recognized something strangely profound in his suffering—that it wasn’t for nothing. He realized that, in some way, God was going to take his experiences of pain and loss and use them to accomplish something good.

Chris had lived through the unspeakable, the unimaginable. But all of it, however dark, gave him a unique ability to relate to other victims and survivors of war. He discovered that his brokenness, combined with God’s goodness, could help guide others to a place of peace and closure. He decided to go back to school to become a chaplain.

The Journey to Chaplaincy

Chris is eager to share God’s Word with others as a chaplain. To Service members and Veterans, he shares these words: “No matter how dark and frustrating life can be, there is always light when you look for it and when you need it.” He recommends reading the book of Psalms—yes, the entire book. “No particular one—I enjoy them all!” he says.

God’s Word is a Gift

Scripture helped heal Chris’s heart and renew his spirit. God’s purpose ignited a new passion within his being. Now, as he prepares himself for chaplaincy, he can become a vessel through which God’s message of healing love can flow.

Because of you, a Bible was there for Chris when he needed it most. Thank you. Chris says, “I would not have been able to succeed and see myself in a positive light without this gift. I greatly appreciate it.”

God, thank you for bringing Chris through the battles he’s faced into a place of peace and security in you. Please enable those serving you through chaplaincy to speak words of life to everyone they encounter.

The Bible and the Military: A Veterans Day Exclusive Report

A special report on the trends revealed in the State of the Bible 2021 regarding stress, Bible use, and more among our U.S. Military

Americans believe that the Bible can have a positive influence on our nation's leaders.