What’s the Most Bible-Minded City in America?

When it comes to U.S. cities that embrace the Bible, Knoxville, Tenn., tops the list. A newly released ranking from American Bible Society finds Knoxville residents have the highest combined levels of regular Bible reading and belief in the Bible’s accuracy.

American Bible Society’s study of “America’s Most Bible-Minded Cities” found that while the Bible Belt performed strongly, Colorado Springs, Colo., deemed the No. 1 “holiest city” by Men’s Health just two years ago, has now fallen to the middle of the pack. And, debunking any sense of a single, monolithic region, other stereotypically known Bible Belt cities fell to the mid-range rankings include Houston, Texas; Tulsa, Okla.; and San Antonio, Texas.

Conducted by Barna Group, the study analyzes 96 geographic regions across the U.S. “We are continuously evaluating interaction with and views of the Bible among Americans,” said Geoffrey Morin, chief communications officer at American Bible Society. “Knowing the Bible landscape across the U.S. is key to helping people engage with the most-translated, best-selling book of all time. Whether you are living in the Bible Belt, the Midwest, New England or the Great Lakes, the Bible speaks to the needs, concerns and challenges of every American.”

A closer look at the findings showed a trend related to population density. Of the top 25 Bible-minded markets, only three have a population of greater than 1 million households: Charlotte, N.C., Nashville, Tenn., and Raleigh/Durham, N.C. 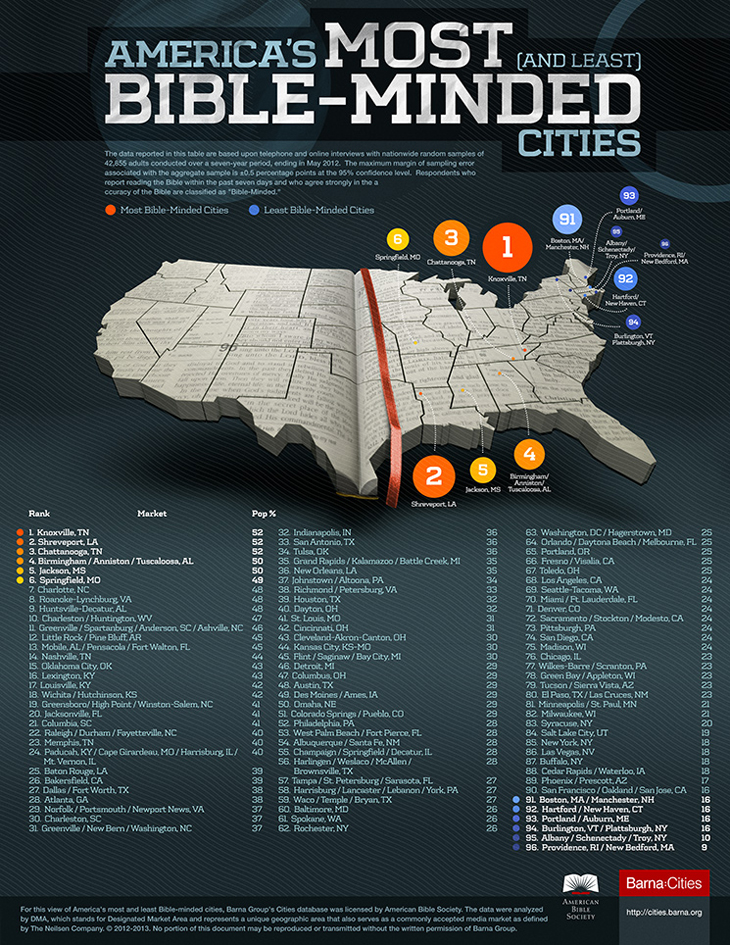 NFL veteran and fullback for the New Orleans Saints, Heath Evans talks about his faith...

Joanna Lothers, 8½, sold cookies at her father's office to raise money for Scripture...