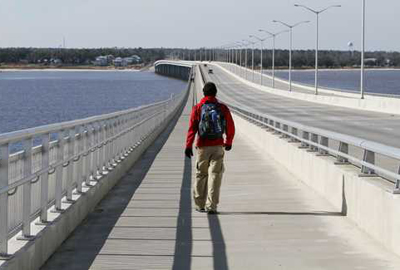 The idea started in a casual conversation with his parents. Garth Poorman, a former executive assistant at the American Bible Society, was musing that he'd traveled cross-country by bus and by car. The only thing left was to travel by foot.

It would take five years of dismissing the idea, embracing it and then dismissing it again before he finally knew he had to start walking.

On Aug. 29, 2009, Poorman tied his first pair of hiking boots (he wore out three) and began a 1,620-mile trek from Hebron, N.Y., to New Orleans. Although he describes the trip as “a personal soul quest,” Poorman wanted the walk to be about other people as well. So he decided to stay with strangers every night of his trip, relying solely on the hospitality and kindness of others.

During his journey, Poorman encountered errant dogs, driving rain, bed bugs and a drunk with a shotgun who threatened his life.

But these experiences pale in comparison to the kindness he received from 104 people and their families who welcomed him into their homes and their hearts.

The genesis for this experience had its roots in Poorman's youth. As a boy, Poorman remembers the time his family hosted an exchange student from South Africa. This visitor opened his eyes to the wonder of different people from different cultures.

“I can't imagine what my life would have been like without that experience,” recalls Poorman, whose father moved the family to Harare, Zimbabwe, for three years after that student's visit. “This [walk] would have never happened if I didn't live in a home that welcomed strangers.”

Finding strangers to welcome him nightly would prove to be the most challenging part of the trip. Poorman describes it as a “consistent jigsaw puzzle” of locating people who would be willing to host him along his way. Often, references from those he knew or stayed with would lay the foundation for a welcome from strangers in another town or state.

Once he found a place to stay, people fed Poorman as if he were a king. The 36-year-old New York native enjoyed a plethora of American and ethnic foods, from Indian to Peruvian to Jamaican. The food was so good and plentiful that he only lost four pounds on his four-month journey. “I attribute that to the amazing dinners people would make for me,” laughs Poorman, who's 6 feet 2 inches tall and weighs 190 pounds. 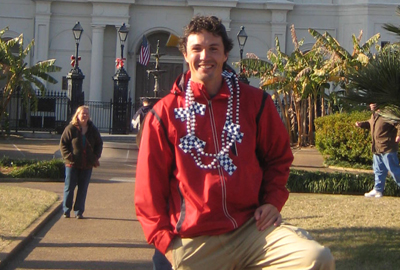 Poorman was successful finding a place to stay every night, except for four. One of those nights turned into the most miserable experiences of the trip. He was in Opal, Va., and was forced to stay in the town's only motel, which wasn't exactly a luxurious establishment. In fact, the bed was infested with bed bugs. The insects repeatedly pierced Poorman's arms and ankles, making for a truly awful night.

Although the bug bites were an inconvenience, encountering a drunk with a shotgun was a true threat to Poorman's safety. The incident occurred on his way to Monroeville, Ala. The drunk pulled up while Poorman walked and insisted he get into his car. When Poorman refused, the man grew agitated and threatened to kill him unless he got in. Thinking quickly, Poorman grabbed the loaded shotgun off the seat and ran. He flagged a man in a pickup truck, who gave him a ride to the sheriff's office.

It turns out the drunken man had a history of psychiatric problems. Poorman didn't press charges, but the gun was taken away from him—not be returned.

For Poorman, the journey to New Orleans wasn't so much about walking as it was about living an authentic life. For 10 years, he had been an executive assistant in organizations on both coasts. In his blog, he describes the position as “the path to least resistance.” It was low-stress, easy work he “never thought about from 5:01 p.m. to 8:59 a.m.”

Although the work was easy, it didn't satisfy. Inside, a voice reminded him: “This isn't the truest expression of who you are.” Nevertheless, financial security and fear of failure rooted him to the familiar. One day, though, Poorman knew he could no longer deny the truth.

Joseph John Campbell, who wrote The Power of Myth, inspired Poorman. In his book, Campbell summed his philosophy for life with the following phrase: “Follow your bliss.” The phrase urges people to live the life they ought to live, not the one they happened to be living.

For Poorman, this trip was the start of the life he knew he had to live.

He is eager to see what lies ahead.

Helping the Least, the Lost, and the Lonely

A painting presented to American Bible Society by Wycliffe to commemorate the 500th Bible translation...