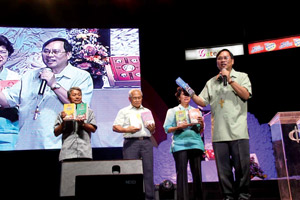 (Photo courtesy of the Bible Society of the Philippines.)

The Philippines is the only predominantly Christian nation in Southeast Asia, but a 2005 Nielsen study, commissioned by the Philippine Bible Society (PBS), found that only 40 percent of Filipinos had a Bible. A five-year nationwide campaign is uniting key Roman Catholic and Evangelical churches in the distribution of 5 million low-cost Bibles to the poorest families. Before this campaign, called “May They Be One,” PBS had been distributing about 700,000 Bibles yearly. This campaign is projected to reach 4.7 million people with Scriptures by the end of 2013.

Excited to have her own Bible, a 15-year-old learns more about God