A Ray of Hope in Turkana 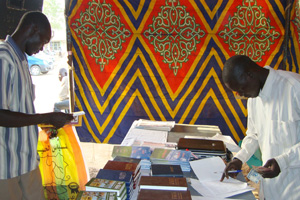 Villagers in Nepeikar, Lodwar County, Kenya, carrying food supplies brought by the Bible Society of Kenya and the Anglican Church of Kenya in December 2011.

Thanks to an American Bible Society emergency appeal last summer, some 2,000 Kenyan families had food this winter, despite the worst drought to hit the Horn of Africa in 60 years.

Although 4 million people in the Horn of Africa were starving, most relief efforts were focused on refugee camps straddling Somalia and Kenya. ABS, armed with research from Global Scripture Impact (GSI), sharpened the focus of its response and helped those who were far from the spotlight. ABS and its donors raised more than $150,000 to get food, water and God's Word to 10 of the worst-hit villages in Turkana, Northwest Kenya.

GSI, the research arm of ABS (which just celebrated five years in operation), had relationships with people on the ground who knew the needs. The Bible Society of Kenya (BSK), working with local churches, identified where the need was the greatest.

“Even in a crisis as big as this, the role of GSI is to be able to identify where donor's investments will make the biggest difference,” said GSI Research Director Rhoda Gathoga. “In this incident, the world was focused on Dadaab refugee camps on the border of Somalia and Kenya. While this was a critical need, it focused on one area instead of the vast number of suffering people. GSI, working with BSK, was able to focus on those yet to be served.”

Within 48 hours of the decision to mount an emergency appeal, GSI had produced an Impact Briefing that identified the Bible Society as the agency to work with churches representing the 10 remote villages, along with Living Water International.

The plan was that BSK would receive the funds to acquire and distribute food and Bibles in audio and print formats. Living Water would dig wells.

Thomas Tharao, head of operations for BSK, described the December delivery of 11 tons of food to feed 500 families living in and around Lodwar, Kenya. Traveling more than 40 miles on bad roads, the delivery truck got stuck trying to cross the soft sand of a dry riverbed. The team had to push the truck and reroute to another town for distribution. Some team members had to walk the remaining 22 miles to alert the townspeople of the change in plans.

“The next morning, we arrived early at 8 a.m. to distribute the food,” said Tharao. “We were surprised to find that the villagers . . . had already arrived. They . . . had started their journey at 1 a.m. . . . to avoid walking in the high temperatures, which often clock over 107 degrees.”

Tharao was very grateful for the response from ABS donors. “This was a very fulfilling exercise, knowing that for the next one month, 500 families would not go hungry. . . .

It was also good to see that people have a hunger for the Word of God and for the education the project will provide through the provision of Bibles, New Reader Portions and Audio Bibles. Indeed this project is bringing a ray of hope to the lives of the people of Turkana,” he said.