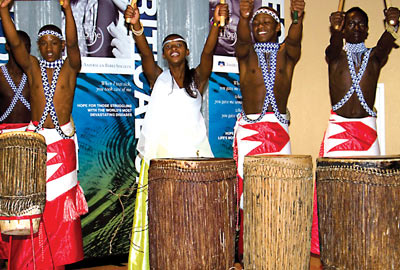 Celebrated writer and Bible teacher, Philip Yancey, opened the American Bible Society's fifth Global Bible Summit with a simple and powerful invitation. “The cross set loose a stream of grace and it carves its way through history, like water, it flows down, down, down. Sometimes the church jumps in and sometimes it doesn't. Part of prayer is getting God’s eagle-eye view of the world. Ask God to correct your vision and then ask him what you can do.”

So began a remarkable weekend of exploration, prayer and discovery. Using the theme “Embodying Hope,” the three-day Summit, held in New York City, invited attendees to see the fruit of God's Word in action, and encouraged them to move from the sidelines and join in this exciting work wherever they are.

The four Bible Society leader-presenters hailed from Brazil, Africa, Australia and the Middle East. Each one described the growth of the gospel in their region through ministries of reconciliation, restoration and critical care. Collectively they echoed each other's conviction that, as Christians, wherever we are, we are called to embody the deep reaching love of Jesus. And each posed the same question: Are we willing?

Challenged by Philip Yancey's message, participants were reminded, “hope is available because God is living in us.”

As Christians, we are invited to express God's hope wherever we are. This invitation was reinforced by Philip Yancey across the weekend, ”The question for the modern era [is]: where is God? God is wherever Christians are. Hope is available because God is living in us.”

“Many people do not know much about Brazil. When you arrive you think it's a first-world country, but then you go to the inner parts and you see it's less than third-world,” says Dr. Rudi Zimmer, executive director of the Bible Society of Brazil (BBS). “The Amazonian population alone is 13 million, and the difference between the rich and poor is dramatic. As you might expect, diseases and illnesses in the Amazon stem from HIV/AIDS, malaria, tuberculosis, measles, infectious diseases, dermatoses, diarrhea, diabetes, malnutrition, cancer and poisonous snake bites.”

Since 1962, the BBS has been serving the critical care needs of the people along the Amazon Basin, through the Light of the Amazon boat ministry. The boat is a well-equipped floating hospital with an infirmary, laboratory, pharmacy, dental equipment, doctors, nurses and volunteers and cares for 500 people in one excursion. Its ministry has become a key service to the country, and has been acknowledged by organizations outside of the Bible Society. The emphasis on Scripture ministry combined with critical care has led to improved hygiene, reduced environmental contaminants, a decrease in violent crime and growth among Christian congregations.

The program is being expanded to eventually include a bus and truck ministry which will also deliver Scriptures and medical care. Through such innovative programs the BBS is strategically poised to help the church in Brazil take the gospel to all of its people.

Nowhere have global challenges been more evident than in Africa in the 21st century. David Ieayi Hammond coordinates Bible work in 40 countries south of the Sahara in Africa from his base in Nairobi, Kenya. He says poverty, disease and illiteracy abound, but the biggest challenge in Africa is a lack of government leadership with integrity. And so, the Bible Societies are a ray of hope, serving as trusted partners for millions of hurting people. David says, “Churches are our biggest partner, and they are the agents of change and mission in Africa. But while Christianity is growing fast, it is not growing deep. The Bible Society seeks to encourage churches to get their people to delve into the Word of God.”

The Democratic Republic of Congo has been troubled for decades with warring groups that have killed and displaced millions of people. From 2006-2007, rape was a common weapon, leaving tens of thousands of women with physical, emotional and spiritual scars. Now, spiritual and emotional healing comes from the Word of God, thanks, in part, to a Scripture Portion, “The Path of Healing,” produced in Swahili and English by the Bible Society of Kenya. Hope is also being revived through the Faith Comes By Hearing Audio Scriptures, and the United Bible Societies' Good Samaritan programs.

Joining Together in the Wake of Genocide

Daniel Willis, the chief executive officer of the Bible Society in New South Wales, Australia, first began working in Rwanda in partnership with the African Enterprise's HIV program. In 1994, when the genocide occurred, over one million people were killed in face-to-face massacre. Daniel likens the volume of the violence in Rwanda to three “9/11s” a day for 100 days in a row.

He knew that his Bible Society was called to reach out in mercy to help Rwandans reconcile in the aftermath of the genocide. So they went to work with the African Enterprise and developed a three-year literacy-through-Scriptures program for 100,000 school-age children, teaching them reconciliation stories. The impact of the program was so powerful that the Rwandan government asked that the program be expanded to reach 2.25 million more children. Daniel said the challenge to the Bible Society isn't to solve all the problems on their own, but to encourage partnerships with others who are already engaged in the work.

As an illustration of the power of reconciliation, Summit participants viewed the film, “As We Forgive,” which documents two women in Rwanda who confront the men who slaughtered their families during the 1994 genocide. The viewer experiences the intimacy of the extraordinary journey from death to life on both sides through the process of face-to-face forgiveness. 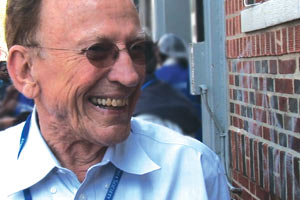 The steady downpour of rain suddenly stopped for three hours allowing the Global Bible Summit attendees to volunteer for hands-on ministry. They traveled to Flatbush, Brooklyn to work with an ABS partner organization, Operation Compassion (OC) and The Church of God of East Flatbush to deliver Scripture resources, food and other necessities to struggling families in that neighborhood.

Each week, the Church's community program welcomes hundreds of people to its soup kitchen and food pantry. Diana Nelson, executive director of the program, is proud of the work they accomplish.

And so was Jack Turner, a retired businessman (pictured above) who attended the summit. “This day is wild; I love it! It is blessing my life to see the Scriptures being accepted alongside the food. The secret of this life is not about ourselves but about sharing with others,” he said.

Few know the agonies of loss and division better than Regional Secretary to the Middle East, Labib Madanat. “I always marvel at the capacity of the [Middle Eastern] people to keep hoping. The peace process is in shatters, but it is one of God's imprints in us to keep hoping. But when something provokes and the hope is shattered, the flood of bad memories and feelings erupts. It happens on both sides.”

Labib's work includes bringing much-needed compassion to help bridge the divide across his native land. He described how the leader of a politically-charged group recently called and pleaded with him not to stop [the ministry of] a local food pantry. Labib's response came from his conviction that Christianity is anti-fear and love never fails. He said, “When we fall in love with people, we need to acknowledge goodness where we see it. The church is in the business of restoring dignity to humanity. There is no shortage of opportunities, because when we love, we seek them. We are all overwhelmed, but we are not called to change the world — we are called simply to know God, be faithful and engage in the complexity.”

The challenge of sharing the hope of the gospel is the same wherever we are. Labib Madanat framed it well: “Do Christians have hope in the Holy Land or any land? The answer is in the question: Christians are hope. I am not waiting for hope, hope is living in me.”

The American Bible Society invites you to join in our mission, through prayer and financial support, to make the Bible available to every person in a language and format each can understand and afford, so all people may experience its life-changing message.

Joanna Lothers, 8½, sold cookies at her father's office to raise money for Scripture...