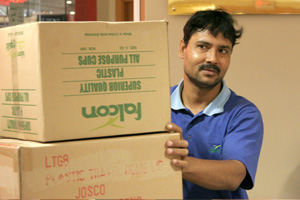 Prakash wakes up each morning surrounded by sand, heat and a burden of loneliness. A migrant worker in the United Arab Emirates (UAE), Prakash lives in a cramped, dusty labor camp more than 1,000 miles away from his family in India. He spends his days working near Sharjah, the third largest city in UAE, and returns to the desert labor camp at night. . . if he's lucky.

As economic growth in cities such as Sharjah, Dubai and Kuwait City has slowed, demand for migrant labor has disappeared. But the laborers are still there – stuck in camps without an income or a way to return home.

Prakash, who became the family provider after his father died several years ago, is no stranger to despair. He remembers one point when he felt the pressure would consume him. Prakash had been hearing reports of migrant workers committing suicide. And he may have considered taking his own life. But during this period of anxiety, he attended a prayer meeting. The focus that night was on Matthew 6.26,27:

“Look at the birds: they do not plant seeds, gather a harvest and put it in barns; yet your Father in heaven takes care of them! Aren’t you worth much more than birds? Can any of you live a bit longer by worrying about it?” (GNT)

Since the oil industry catapulted the Gulf's economy onto the world scene, expatriate workers like Prakash have poured into the Gulf states, which include UAE, Kuwait, Saudi Arabia, Bahrain, Qatar, Oman and Yemen. In some countries, the number of expatriate workers exceeds the number of nationals; roughly 80 percent of people living in UAE and 75 percent in Qatar are expatriates. Conditions are harsh and people need the support of Scripture to bear their burdens. Yet many workers who come from countries such as India, Pakistan, the Philippines and Somalia, cannot engage with God's Word because they don't have access to Bibles in their own language.

The Bible Society in the Gulf (BSG), with support from American Bible Society, is responding to this need by providing God's Word to expatriate workers in mediums they can understand at affordable prices, declaring 2009 and 2010 “The Years of the Migrant Workers.”

Hrayr Jebejian, General Secretary of the Bible Society in the Gulf, says that the Bible Society — the only Christian publishing organization in the region — provides Scripture in the context expatriates are familiar with. Then the workers can begin to understand how the Gospel applies to their struggle.

Disciples of All Nations

Each week, 40 migrant workers squeeze into a small studio apartment to pray. Everyone in the group speaks Tamil except for one man, Lal, who speaks Hindi. Although he can't understand the other men, Lal comes back every week because he feels peace as the men pray around him. And now, with an audio Scripture in Hindi, he can find peace in the Word of God.

In the Gulf region, migrant workers like Prakash and Lal encounter God's Word in Urdu, Amharic, Hindi, Tamil and Tagalog. Sometimes the format is a printed Bible; other times, it's a recording or an oral story. But in all languages and all mediums, the result is the same: new hope and joy in the midst of daily struggle.

This church in China has five services each weekend and still does not have enough...

In the Potter’s Hands

Flora, 27, raised goats and worked in other forms of agriculture in the Eastern Democratic Republic...