RecordAfrica & Around The World & India 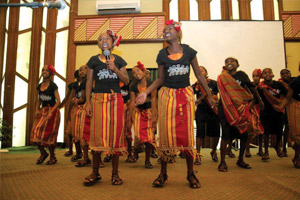 Members of the Afrian Children's Choir performed at the opening ceremony for the 2012 Project Round Table, held in Nairobi, Kenya.

Additional projects that stand to benefit Chinese Christians are the Financial Stewardship Bible, the Bible application YouVersion®, the e100 Bible reading plan and a children's Bible video series. ABS is committed to bringing resources such as these to believers in China, so that Chinese Christians can continue to learn and grow in their faith.

The Shillong Translations Centre in India is a place “Where Christ answers to more than 50 names,” according to an article in the Calcutta Telegraph. Since 2007, the Translations Centre has completed 47 new translations for languages that previously had no Scripture. Funding from American Bible Society ensures that this crucial work of Bible translation continues in the world's most linguistically diverse location.

Rev. Dr. Mani Chacko, general secretary of Bible Society India, says impeccable Scripture translations are an overarching goal of BSI. “Many [others] are engaged in making a huge margin out of translation and sales of the Bible,” Chacko says, which in turn leads to issues of credibility in the translations. But BSI is unwavering in its insistence that Bible translations be accurate so that someday, every language group in India can know the power of the Gospel.

In the parable of the “Pearl of Great Price,” Jesus told of a man who sold everything to purchase something highly valuable. In China, a woman named Yip and her family also found something valuable — God's Word!

To allow Yip to study the Bible and teach it to others, her family sold their most valuable possession — their water buffalo. This was no small decision. Yip and her family are farmers, and their water buffalo was the “tractor” that helped plow their fields. The buffalo's milk also helped put food on the family's table. But they were willing to sell this valuable animal so Yip could have something even greater — an expanded knowledge of God's Word.

A sacrifice this large is nothing new for the people in Yip's community. They live in a mountainous area without roads or transportation. To get to church, most of the people start out on Saturday, making the six-mile trek on foot over the mountains. They worship all day Sunday and walk back home on Monday. Since the church does not have a pastor, the congregation relies on Yip to instruct them in God's Word. Through our partnership with Amity Printing Press in Nanjing, American Bible Society is helping to ensure that people like Yip continue to hear the Good News.

United Bible Societies held its largest Project Roundtable to date — some 160 representatives from 60 different national Bible Societies — in Nairobi, Kenya, this past June.

This annual gathering helps to shape the focus of ministry in countries across the Bible Society fellowship. Bible Society leaders brought plans on ministry projects they want to implement in the coming year. These projects became more tightly focused and defined as they were presented and discussed among peers in the roundtable sessions. Among ministry projects presented were those focusing on Bible advocacy and literacy, trauma healing and the Good Samaritan program. Themed seminars on strategic program areas, such as Bible advocacy, HIV, literacy, and trauma healing and reconciliation were also held.

Representatives of American Bible Society, including researchers from Global Scripture Impact, took part in discussions at most tables.

Plans for the 2013 Project Roundtable are under way. Bible Society of India has offered to host the annual event.

Togo - No Longer a Thief

“I was born in Pya, in the northern part of Togo, in 1991,” said Gnassingbe Hodabalo. “I was part of a group of robbers who operated in Kara and its surroundings. The first time i was imprisoned was in 2009, due to the theft of a sewing machine.

“For that, I spent two months in jail before my father intervened to get me out from there. It is here in the prison that friends introduced me to motorbike theft, which is much more profitable.

“I got into this game right after I came out of the prison and was stealing motorcycles to resell them in Benin and in other cities of Togo. I was arrested again and imprisoned for the second time . . . My parents said that an evil spirit was behind my attitudes, pushing me to steal.

“They spent a lot of money, going to consult fetish priests to get me out of this life, but it did not work. Other offenses have led me to prison again for the third time, and it is here now that I met Jesus. Yesterday, I had friends who taught me how to steal and commit crimes. But now, I have friends who teach me the way that leads to God, and with their help, I discovered today that I was in an abyss.

“In the prison here, I also get involved in the activities of sewing during my free time. Now, I do my best to participate in the listening sessions of Faith Comes By Hearing® and I also like the prayer sessions, hoping that this time, when I am released from prison, I will not come back again.”

This Congolese woman and many like her are being helped through ABS's Restoration...

The three-step End-to-End program is providing God’s Word to people in Africa.