“When we listened to the talking Bible . . . I abandoned my evil ways.”

Hearts are turning to Jesus, thanks to audio Bibles. 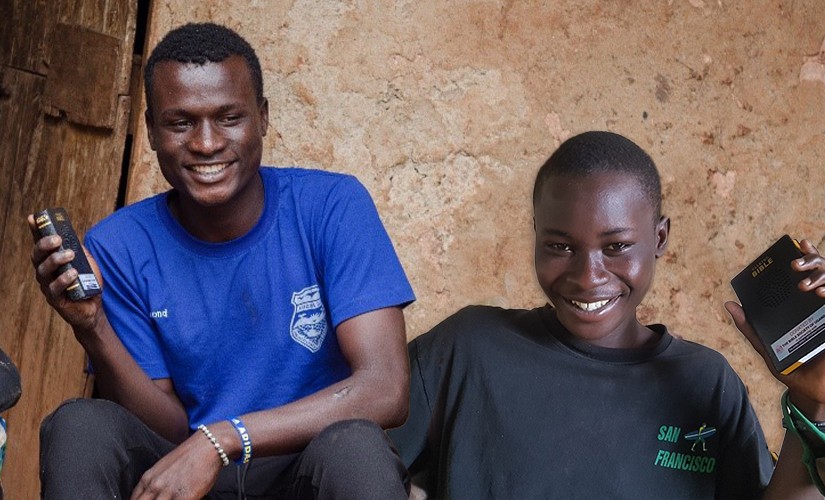 The preaching gadget . . . the talking Bible . . . the portable preacher . . . these are just a few of the names Darren* and Rayan* and their friends use to describe audio Bibles. No matter what they are called in the field, the listening devices you help make available are turning even the hardest hearts to Jesus.

Kinawataka is one of the massive slums in Kampala, Uganda. Home to over 1,200 deeply impoverished families, it is no surprise that crime is rampant, much of it perpetrated by notorious gangs of 6- to 16-year-old boys like Darren and Rayan.

Darren, one of the gang leaders, recounts how they would steal anything and everything they came across . . . phones, purses, shoes left by an entrance, clothes hanging to dry . . . nothing was off limits. Rayan detailed how, since his parents often left him at home alone, he joined his friends learning to pick pockets.

With the lockdown from the pandemic, life in Kinawataka became much harder. But the light of God’s Word shines even in the darkest of places, and thanks to our faithful partners, the Bible Society of Uganda distributed audio Bibles in Kinawataka. Local churches invited youth to come, and the local police encouraged some of the young boys to attend. Soon, listening groups were formed.

Before long, five of the most well-known gang members had given their lives to Christ, including Darren and Rayan.

“When we listened to the talking Bible, I heard of Saul’s transformation to Paul the Apostle, and I was touched. I abandoned my evil ways.” Now, Darren, Rayan, and another boy from their group have found work selling sugarcane to make enough money to survive.

Our partnering are helping to change lives for eternity through their faithful commitment to sharing God’s Word with those who long to know Him!