Once a serial killer, David Berkowitz now shares his conversion to Christ 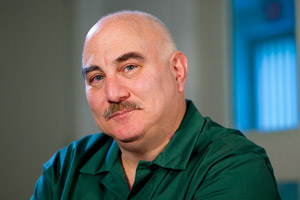 When you meet David Berkowitz, you're standing in the company of one of our nation's most notorious serial killers.

David Berkowitz, self-named the Son of Sam, killed six people in New York City, injured others and sent a wave of terror through the city during the late 1970s.

Yet Christ chose to meet him in the most humble of circumstances — a prison cell — and transformed Berkowitz's heart, mind and soul. He does not forget his acts of violence, nor the harm he caused. But he is indeed a man changed.

American Bible Society, through its God Sets You Free™ program, interviewed Berkowitz in his maximum security prison in upstate New York in December. ABS videotaped David as he recalled the start of God reaching out to him. It was a cold night, nearly 10 years after he first entered prison. Berkowitz needed to get away from the din of outbursts, cursing and noise that punctuates daily prison life.

As he walked the prison yard, a man came toward him; Berkowitz eyed him suspiciously. This stranger, who was named Rick, introduced himself. Then he looked Berkowitz in the eyes and said, “'David, Jesus Christ loves you, and he wants to forgive you. He has a plan and purpose for you life, and he sent me to this prison to tell you this.'”

Berkowitz again shook his head but allowed Rick to enter his life. They walked the prison yard together, lifted weights in the gym or simply spent time talking. Rick told Berkowitz about his life as a Christian and even read Scripture to him. The experience didn't do much for Berkowitz, who listened politely but felt “as if his words were falling on deaf ears. I felt there was no hope for me, that God had no interest in me whatsoever.”

Berkowitz, however, accepted the gift Rick gave him: a copy of the New Testament with the Psalms and Proverbs. Because he liked to read, Berkowitz flipped through the Psalms and identified with many of them. He also liked the poetry and “found it really beautiful,” he says.

But up to this point, the Psalms were simply lyrical poetry — until he started reading Psalm 34. Then God's Word became alive and active in his heart. Emotion welled up in his soul, and he began to cry at verse 6: “This poor man cried and the Lord heard him and saved him out of all his troubles.”

Feeling an overwhelming desire to talk to God, Berkowitz knelt on a cold cement floor for nearly 30 minutes, crying to Jesus and asking for forgiveness.

Changing the lives of prisoners with God’s Word.| Read Now »

When Berkowitz got up from the floor, he said he felt as if a “tremendous weight had been lifted from my shoulders. I slept like a baby.”
A few days later, Berkowitz saw Rick and told him what happened. “'David,'” Rick said, “'from this moment on, your life is never going to be the same. God is going to do amazing things for you.'”

Shortly after this, Rick was transferred, and Berkowitz never saw him again. But Berkowitz thanks the Lord every day for sending Rick into his life. “I shudder to think what my life would have been like if I never came to Christ,” he says. “I honestly believe I would not be alive today. I probably would have taken my own life.”

David's story is powerful, but not unusual.

The apostle Paul's conversion is one of the most dramatic displays of God's power to transform lives. Saul/Paul persecuted Christians and was on his way to Damascus to kill even more believers when he encountered the risen Christ in a searing vision of light.

From that moment, he changed and became the greatest missionary in Christianity.

Berkowitz too has a new name: Son of Hope. Each week, he assists with chapel services in the prison. He is an elder, as well as a worship leader. He visits people in a nearby mental health housing area and cares for their daily needs.

Standing as a living testament to the power of God's love and forgiveness, Berkowitz says the Lord's mercy is boundless. “No one has done so much bad or so much evil that God can't forgive them,” Berkowitz says.

Even though he's been in prison for more than three decades, Berkowitz says he “no longer sees the prison bars. My eyes are focused beyond that to see Jesus who is the author and finisher of my faith.

“My freedom is found in one word: Jesus.”

The Least of These

Bible Sunday toolkitRegular encounters with God through the Scriptures is the catalyst for significant personal...

Dave Frey performing at Winter Jam 2010.The prestigious “New Artist of the Year&...