“Can I have a children’s Bible?”

Sparking a miracle on the frontlines in Ukraine! 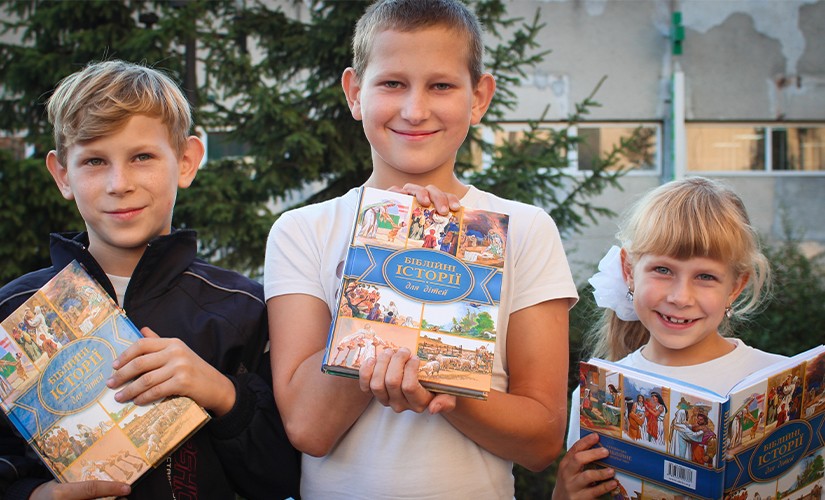 While Bible Society team members were on the frontlines in Ukraine visiting soldiers, praying, and passing out Bibles, something odd happened . . .

Oleksandr*, a Ukrainian lieutenant, approached the group with a serious look. “Can I have a children’s Bible?”

He then explained the special request. Two years ago, when the team previously visited the frontlines, they prayed with him. Oleksandr and his wife had wanted children, but multiple doctors told them it wasn’t possible. After the prayer, he asked for a children’s Bible in faith.

“About a year later, my wife got pregnant and she read stories from that Bible to our child in her womb,” he says. It was a miracle!

Later, they learned that God had doubled their prayer request, blessing them with twin boys. Oleksandr wanted a second children’s Bible so he could read stories to his sons from a distance.

“I want to call my sons on the phone and read the Bible stories to my sons, so they can look at the pictures as I read to them,” he says.

This is just one example of how our faithful friends are touching lives through their generous support. The people of Ukraine need the miraculous hope of God’s Word more than ever. He is speaking to hearts through His eternal and unchangeable Word. And God is working miracles among people.

The Ukraine crisis with Russia has become the bloodiest European conflict since the wars over the former Yugoslavia in the early 1990s. Over 4,000 Ukrainians have been killed, and millions of people are suffering. More than 2 million had to flee their homes as refugees. Entire communities have fallen into poverty, an issue that has been made worse by the COVID-19 crisis.

The ongoing support of our efforts in Ukraine and around the world blesses so many families who are feeling hopeless. The Bibles our financial partners provide give them hope. Many thanks to our partners for giving people God’s Word in Ukraine.

“This Bible is a miracle.”

Providing God’s Word to the lost in Southeast Europe.

“The Bible has helped me in moments of difficulty.”