“Reading the Bible makes me believe that Jesus will save me,” says Bujar. 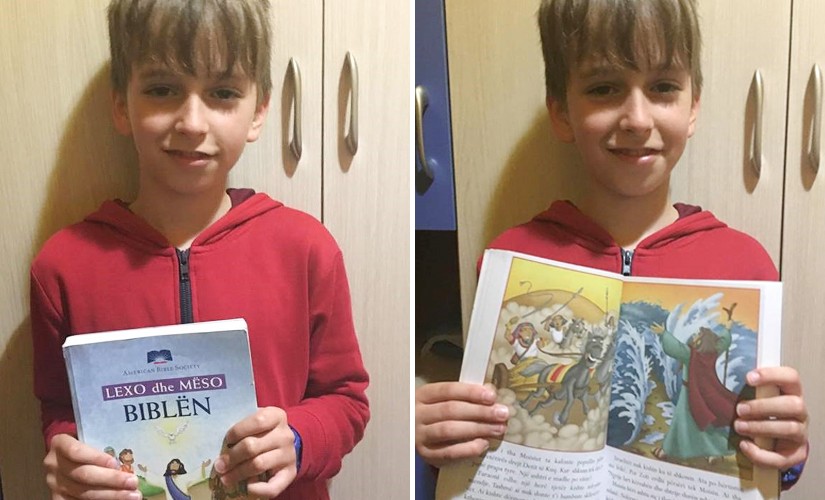 Bujar* doesn’t remember life without a Bible. The 9-year-old received his first Bible from the Bible Society when he was just 4 years old. By the time he was 6, he was reading on his own.

“When I learned how to read, every night I would lie down on my bed and read it,” he shares. “Reading the Bible makes me believe that Jesus will save me.”

Not that long ago, his story would have been unheard of in his country. For decades, a violent campaign against religion raged in Albania. A communist and atheist regime was in charge, ending all religious freedoms. Churches were shut down or destroyed. Christians were killed.

But with the fall of the Berlin Wall, freedom spread to the countries of Eastern Europe. In the early 1990s, Albania ended 46 years of isolated communist rule and established a multiparty democracy. Churches reopened. The people of Albania could finally worship without fear of persecution, or fear of being thrown in jail for owning a Bible.

Because religious freedom was a foreign concept, reaching new believers was a challenge. To overcome this, the Bible Society has been using a unique and successful outreach approach. By providing copies of God’s Word and reading passages from the Bible at local sporting events, they were able to reach youth like Bujar.

Bujar’s story is just one example of how God’s Word is changing lives in a nation once closed to the Bible. Reaching out to the youth of Albania with their first Bibles will help the next generation embrace and spread God’s message of love and hope.

“Your donors are providing the Bible to people who have been denied contact with the Bible,” shares Oldi Morava, an Albanian Bible translator.

We are grateful to American Bible Society’s financial partners for helping to distribute Bibles in Albania. Lives are being changed and the next generation is being shaped through God’s Word!

The need for God’s Word is still great for Russian-Georgian war survivors.

“My life has changed dramatically.”

Former communist nation reached with the hope of God’s Word!