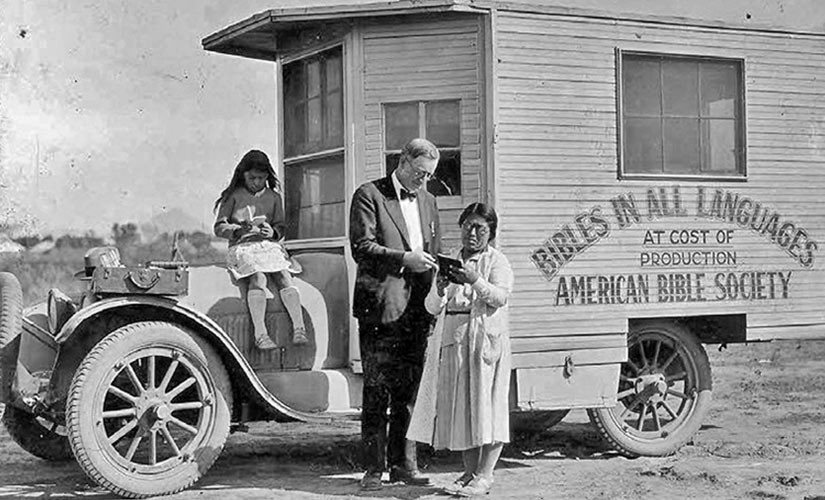 On May 11, 1816 local Bible Societies and civic leaders gathered in New York City with a united mission: to put aside political and denominational differences for the greater good of spreading the Word of God. That day, American Bible Society announced its goal to ensure that every man, woman and child in America would have access to the Bible. Two hundred mission-focused years later, God’s Word has been placed in the hands of more than 6.5 billion people, not only in America, but also around the world.

Elias Boudinot (1740–1821), who had proven his leadership skills as president of the Continental Congress and director of the U.S. Mint, served as American Bible Society’s first president. Other founders included “The Star-Spangled Banner” lyricist Francis Scott Key, The Last of the Mohicans author James Fenimore Cooper, and first Chief Justice of the United States, John Jay.

Six months after its founding, American Bible Society released its first Scripture, an English Bible in the King James (Authorized) Version. The efficacy with which it was able to print the 10,000 copies of the edition was due to using stereotype plates, then an innovative technique in publishing. Keeping step with publishing advances has allowed American Bible Society to efficiently place God’s Word in the waiting hands of billions of people.

From the beginning, the generosity of caring financial partners and friends has made it possible to share Scriptures with those in need. That legacy, which continues today, began two centuries ago!

American Bible Society is beginning its third century in new offices overlooking Independence Hall in Philadelphia—where many of its founders walked, worked and helped build a new nation under God.

“When I consider the 200-year history of American Bible Society, what strikes me most is not all that has changed, but all that has remained the same,” says President Roy L. Peterson. “God’s eternal Word is as true and reliable as ever. Jesus tells us in Matthew 24:35 (GNT), ‘Heaven and earth will pass away, but my words will never pass away.’ As American Bible Society begins a third century of ministry, we remain united to the eternal vision of our founders grounded in Habakkuk 2:14—to see the earth ‘as full of the knowledge of the LORD’s glory as the seas are full of water.’”

“God has faithfully used the ministry of American Bible Society to spread his Word throughout the world for 200 years,” says Dr. Peterson. “None of it would have been possible without the support of partners. I can’t begin to thank you for your faithful partnership with us. There have been many high points—watershed moments of God’s faithfulness worth celebrating together.”

Thank you for being part of this faith journey with us!

Opening Doors for a New Generation of Bible Ministry Volunteers