A million flock to Madrid to renew faith in God's Word 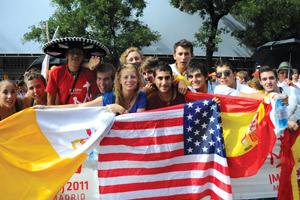 The sun scorched the sidewalks, heating temperatures well up to 100°F. Locals know that mid-August in Madrid is brutally hot, so most flee to the mountains and the beaches for cooler climes. The city seemed shut down and sleepy, on siesta from morning until night.

But all that changed when 1.5 million Catholic youth, ministry leaders and those in religious orders descended on the city for World Youth Day 2011, held Aug. 16 to 21. Pilgrims from around the world — Guam, Africa, Australia, Ireland and the United Kingdom, to name a few — gathered for five days of prayer, fellowship and Catholic unity.

Their enthusiasm was infectious as they roamed the streets and rode the metro, singing hymns, tapping tambourines, waving flags and smiling with joy. Watching them, one couldn't help but be heartened by their excitement and devotion.

“World Youth Day is the best,” said one delegate from Australia. “I am proud to be Catholic and so happy to be here.”

Another delegate from the United States said this was the opportunity of a lifetime. “To be here where the Holy Father is and to be part of such a universal gathering is incredible.”

Pope Benedict XVI arrived on Aug. 18 and spoke at a special opening ceremony to the cheers and prayers of the pilgrims.

One group of U.S. delegates waited seven hours to see the Pope. When asked what they did for so many hours in the blazing sun, they smiled and said, “We played cards. We talked.” Water bottles were distributed to keep everyone hydrated, but the heat was so intense that the fire company took another preventive measure and hosed everyone down. “We were drenched,” said one young man. “And that really helped us stay cool.”

American Bible Society came to Madrid to present a session on Lectio Divina on Aug. 19. Nearly 4,000 young people gathered at the Palacio de Deportes, known as the Love and Life Center for English-speaking pilgrims. While there, they learned the steps of Lectio Divina, and many vowed to take action to live out the message of the Gospel.

A special Scripture Portion from the Gospel of Mark defined the steps in greater detail so pilgrims could practice the method at home.

One bishop who attended the session said Lectio Divina is a beautiful way of praying. “It was good for them to learn about it,” he said. “Anything that helps them unite their hearts and minds to Christ is a wonderful thing.”

Hear God's Word Speak to You

Lectio Divina helps you look at the Sacred Scriptures in a whole new way, a reflective, thought-provoking way. You will hear God's Word as it speaks to you, ever personally, here and now. Follow these steps to experience the richness of Lectio Divina.

1. Lectio
This reading of Scripture is different from the speed-reading we're using to. Instead, read a Scripture passage slowly and attentively, attuned to hear a word or phrase that captures your attention.

2. Meditatio
Once you find a word or phrase in the Scriptures that speaks to you, think about it, memorize it and allow the words to interact with your thoughts, hopes and dreams.

3. Oratio
This third step is prayer, understood as dialogue with God, as a loving conversation with the One who invites you into his embrace. Allow the Word to touch your heart.

4. Contemplatio
Rest in the presence of God who invites you to accept his transforming love. Don't speak. Just enjoy the experience of being in God's presence.

One Teen at a Time

Scripture portions distributed to the homelessMore than 1.3 billion people speak some form of Chinese as...