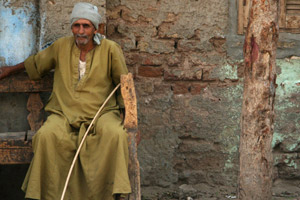 Political and religious tension is at an all-time high in areas of Egypt's Garbage City.
Photo by Malorie Tull

Violence between Christians and Muslims erupted in the shanty town in Manshiyit el Nasr in Cairo, also known as Mokattam Garbage Village. Ten have died, nine of them young Christians and one a Muslim who lives in the village. More than 130 people have been injured, some quite seriously.

The conflict began simmering a few weeks ago when Muslims burned down the Coptic church located on the outskirts of Cairo. Many homes and small shops also were torched by the Muslims in that village. A number of local students, upset by these acts of violence, wanted to show their solidarity.

So they went down to the highway to demonstrate and began pelting cars on the highway, eventually stopping the traffic, reports Rebecca Attalah, wife of the general secretary of the Bible Society of Egypt. Because the youth created such a disturbance, the army was called in and urged the youth to discontinue demonstrating. But they persisted.

From here, violence sharply escalated. Within hours, thousands were fighting; attackers had all kinds of weapons, including guns, while the village youth were defending themselves with stones, Attalah reports. The army did little to quell the conflict, which escalated with the torching of eight houses and several factories. Ten people lost their lives and more than 130 were injured.

Despite the number injured, no ambulances or fire engines arrived at the village until early the next morning, Attalah reports. The town's rather primitive hospitals did their best to treat the wounded, and many people now are in the city hospitals.

Attalah believes the attacks were deliberate acts of violence against Christians in general and the garbage city residents in particular. She asks for prayers for the families of those who've lost their children in this attack. She also asks that the village Christians will not seek revenge, especially following the funerals of the youth.

“Egypt is going through very tough times, with a crumbling system of law and order and an army which seems to be quite weak and at times indecisive,” Attalah reports. Although the recent revolution brought some good and necessary changes, Attalah says, “it also caused quite a collapse in the fabric of society, including the economic system.”

Millions of people are now out of work because foreign companies, investors and tourists have left Egypt and are not returning. This has negatively affected the people who are trying—in vain—to feed their families, Attalah says. Great social unrest is the consequence.

“We need prayer,” Attalah tells American Bible Society. “We hate to see our beloved country collapsing like this, people going hungry and Christians possibly becoming scapegoats for all ills. We need the worldwide body of believers to bring these problems to our sovereign, powerful and loving Lord.”

Please pray for Egypt, especially as we seek to stage this summer's desperately needed children's outreach minitries for tens of thousands. There is no better time for Egypt's children to learn more about the “Prince of Peace.”

Representatives of different churches are united through Taizé prayer. Pictured here is Slovenia's...