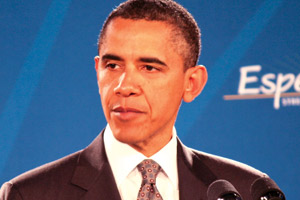 President Barack H. Obama was the keynote speaker at NHPB in May.

Uncover the Word™ Goes Bilingual
Latinos make the U.S. the fifth largest Spanish-speaking country in the world. And, some 20 percent of Americans speak a language other than English at home. American Bible Society is launching a new ministry unit to reach non-English-speaking Christians in the United States.

ABs's Multi-language Ministries creates culture-specific programs, materials, and new media that minister to non-English-speaking persons who reside in the USA and help them engage the Bible in the language of their heart.

In this first year, the unit will focus on Spanish and Brazilian Portuguese speakers.


President Addresses Hispanic Faith Community
The National Hispanic Prayer Breakfast (NHPB) and conference was held May 10-12, in Washington, D.C., with keynote speaker, President Barack H. Obama. He spoke, quoting Deuteronomy 10.19, “Love ye therefore the stranger, for ye were strangers in the land of Egypt,” and addressed the needs of the immigrant community.

The 54th Annual Children's Day Parade
Descubre la Biblia™ was introduced and promoted to the Spanish-speakers in East Harlem at the parade in May. ABS brought the life-transforming message of God's Word to this neighborhood through a promotional float highlighting digital scripture engagement tools (Journeys, Bible search, and the YouVersion® Bible App); a table filled with a variety of scripture resources in both Spanish and English for all ages; and a semi-truck filled with non-perishable food and household items to provide for 500 needy families.

Congo Advocates Appear on Today Show
In June, a group of young bikers supporting the She's My Sister™ initiative appeared at Rockefeller Plaza with Al Roker of the Today Show, who spoke with them briefly, calling attention on-air to their sign pointing to Sister.AmericanBible.org.

Off camera, Ann Curry spoke knowledgeably about the situation in DR Congo. She encouraged them with her parting words: “You're warriors.”

The eight riders pedaled some 2,000 miles between Florida and Maine, and were featured in several newspapers and television stations along the route.

Lewie Briggs, the lead rider and a recent graduate of Franklin and Marshall College told reporters: “The Congo has been called the rape capital of the world. After meeting these remarkable women who have survived the unimaginable, I knew I had to do something to help them reclaim their lives. This bike tour has been a thrilling journey and I’m thankful we were able to advocate for them.”

Anxiety in America
“God is our shelter and strength, always ready to help in times of trouble.”
Psalm 46.1 (GNT)

Only 9% of Americans feel safer today than before 9-11.

82% of Americans turn first to sources outside the Bible in times of anxiety.

Exhibition on view through Cct. 16, “On Eagles' Wings: The King James Bible Turns 400,” is an “utterly fascinating” exhibition, said The National Review. The exhibit includes 130 objects, including more than 50 remarkable Bible editions from 1440 through 1999. Five large-scale paintings, created for the occasion by contemporary artist Makoto Fujimura, are also on display.
Museum of Biblical Art
1865 Broadway at 61st Street
New York, New York
212-408-1500
Mobia.org

Workplace Giving: Bless others through your employee giving plan

It only takes a few minutes to learn how workplace giving can make a difference. Here’s how:

If you are a federal or state employee, you can make payroll deductions to American Bible Society through the campaigns
listed at right.

Please visit ABSRecord.com/workplacegiving and type in your company name. (Call Carmen Feliciano at 212-408-1550 for assistance.)

Oral learners are growing in their faith as they listen to God’s Word.

Create Your Own Scripture Devotional

Sharing God’s Word with your friends, small group or congregation shouldn’t be hard....

Longtime friends of ABS support the Bible cause here and abroad.