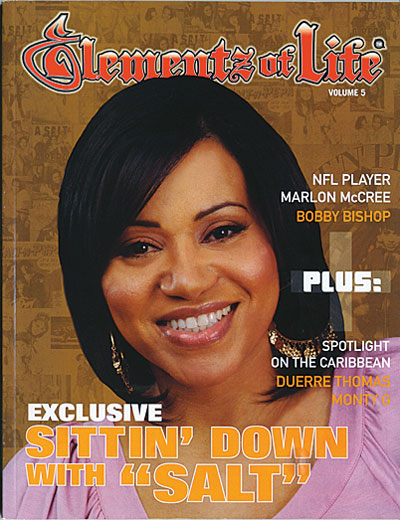 Cheryl “Salt” Wray from Salt-N-Pepa — the most successful female rap group in history — is smiling on the cover of the fifth annual issue of Elementz of Life™.

Salt-N-Pepa released five albums in the 1980s and 90s, received five Grammy Awards, two American Music Awards, and several MTV awards. Despite the fame and fortune, Cheryl still felt empty. She cried out to God, walked away from Salt-N-Pepa and now talks to women about their lives and relationship to Jesus Christ.

Earlier issues of Elementz focused on positive life change through Jesus Christ from violence or drugs to healing. Editor-in-chief Tonya Wilder-Butts, who is also the mission manager for at-risk youth, says that this issue explores the idea of making dreams come true. “Now we’re addressing a transformative process,” she says, “recognizing the gifts God has instilled in each one of us and living up to our full potential, according to his plan.”

The magazine is an outreach ministry that consistently reaches people hungry for God’s Word. Tom Trageser, a ministry network leader with the American Bible Society, was at the annual WOW (Winning Our World) Jam event in Charlotte, N.C. last August. While he was assisting a donor, he watched a couple in their twenties with three young children approach the Elementz tent. The young man said to the young woman, “Honey, do you remember the picture of the cross that I sent to you while I was in prison? Well, I got it out of this magazine’s last issue”

To learn more about the current issue or to receive a copy of the magazine, please visit www.ElementzofLife.com.

Mailbag photo courtesy of Jon Frye and David Hall.Dear Record Editor:I have been...