God and the Gangs

You sent Bibles into Central America’s most dangerous prisons. What did God do with your gift? You have to see it to believe it! 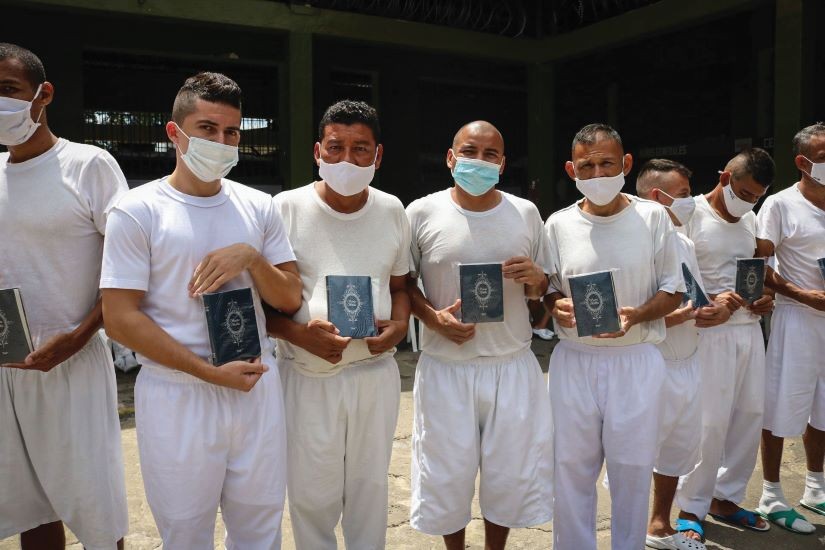 You’ve never attended a church service quite like this one.

Under a blazing sun, hundreds of men flood into a courtyard rimmed with coils of barbed wire. White prison uniforms clash with dark tattoos covering their arms, necks, and faces—visible oaths of allegiance to Central America’s rival gangs. Now sworn enemies stand side-by-side, without cell bars
or guards between them.

And then they begin to sing songs of praise to Jesus.

A Bible revival is sweeping through the prisons of Central America. What was the spark of this spiritual fire? Bibles provided by faithful partners like you.

Fueled by your prayers and generous support, courageous missionaries in Central America are proclaiming the good news of the gospel in the region’s most dangerous prisons. And just like it changed the apostle Paul on the road to Damascus, God’s life-changing Word is transforming even the most hardened criminals into passionate followers of Jesus Christ.

GANG WARFARE HAS TRAPPED CENTRAL AMERICA IN A CYCLE OF DEATH

From a human perspective, the gang-ridden prisons of Central America are the last place on earth you’d expect to find a Bible study, let alone a growing church movement.

For years, the region has been devastated by Mara Salvatrucha (MS-13) and Barrio 18 (18th Street)—two of the most violent gangs in the world. Central American youth find themselves trapped between extreme poverty and gang recruiters. Many boys join a gang at 10 or 11 years old, looking for better opportunities. Instead, their life expectancy drops to just five years.

The odds of survival aren’t any better in prison. Cells are packed with sweaty bodies. In some places, 75 men share a single latrine. Gang tattoos help you identify your friends, but even armed guards can’t always protect you from the enemies who want you dead.

But thanks to you, the Bible is infiltrating the gangs’ cycle of death with words of life.

THE GRACE OF GOD IS FOR EVERYONE—EVEN GANG MEMBERS

“Tomas” is a Christian who travels to different prisons with one of our partner Bible Societies, bringing Bibles you supplied to prisoners no one else will visit.

When he stands outside the prison gate, Tomas says that his spirit often feels heavy. “It’s not because I’m scared,” he says. “It’s because I know there’s a spiritual battle happening on the other side of those walls.”

Inside, Tomas can tell a lot about the prisoners he meets by their tattoos. Horns on their foreheads signal deals made with the devil. Teardrops at the corners of their eyes count the people they’ve killed.

“It can be hard, because you know the harm they have done to society,” Tomas admits. “You see the news, and you see mothers crying for their sons and daughters who have been murdered by these gang members.”

Tomas puts it simply: “The grace of God is for everyone.”

For a while, Tomas remembers, it didn’t feel like his Bible outreach in the prisons was making much of a difference in the beliefs and behaviors of the former gang members.

But he—and other Christians like him—kept coming. They built trust with the prison authorities, visited the prisoners, and preached the gospel to anyone who would listen.

Then something began to change.

Prisoners began surrendering their lives to Christ. They renounced their gang membership. They organized worship services. In prisons where Bibles were scarce, they divided the books into sections so that everyone could read a few words from the Lord.

The Bible had become a precious treasure to these unlikely converts—and they were desperate for more of God’s Word.

GOD’S WORD IS RAISING PRISONERS FROM DEATH TO LIFE

“Santiago” is a prisoner who, thanks to you, recently received a study Bible of his very own.

Before he met Jesus, Santiago’s life was full of death. “I felt like Lazarus,” he says. “But Jesus Christ said: ‘Get up, Lazarus, and come out of that tomb!’ I am a living testimony to all who cannot believe that the gospel of God changes [us].”

Attending a prison church service is perhaps the best place to witness the death-to-life transformation Santiago describes. One American Bible Society staff member recently attended one of these services. The experience is something she’ll never forget.

“Fifteen hundred of these men were singing at the top of their lungs, praising the Lord who had saved them,” she told us. “Arms raised, tears streaming down tattooed, joy-filled faces. It felt like I had been transported to heaven, literally.”

THANK YOU FOR PLANTING THE SEEDS OF SALVATION!

These men—men like Santiago—will always look the part of a gang member. But now their tattoos tell the story of a past life forgiven and healed by Jesus. “The tattoos—that’s the outside of the person, but the inside has been transformed by God,” Tomas says. “That’s the seed that every Bible
brings.”

Like the early church in the book of Acts, former gang members who follow Christ face a path marked by hardship and persecution. Your gift of God’s Word encourages them to stay strong in the faith and to share the gospel with fellow prisoners. And the brave missionaries like Tomas, who risk their lives to deliver the Bibles you provided, want to say “thank you” for your partnership in the gospel.

“The donors who believed in the power of God’s Word—you are the heroes,” he says with a smile. “You are the people God used to bear the fruit we are seeing today. Without you, we would not see it.”

Witness as prisoners in Central America receive their own copies of God’s Word in this stirring video: ABS.Bible/PrisonDistribution

Once a serial killer, David Berkowitz now shares his conversion to Christ

Transforming the lives of America's incarcerated