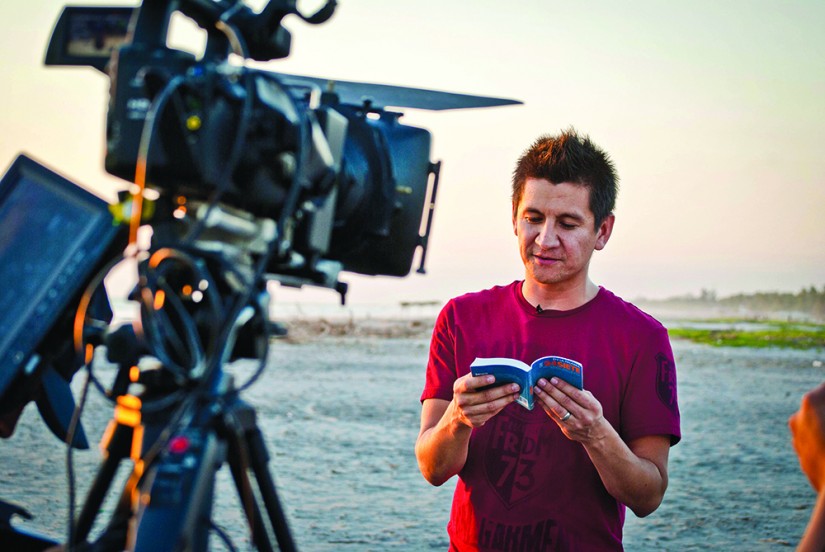 Emmanuel Espinoza, leader of The Christian band Rojo,records a message for an online devotional. Photo by Pablo Langlois.

As a member of the millennial generation, Pablo Langlois knows social media has a powerful impact on how he and his peers think. So the El Salvador native took advantage of social networks to spread the Good News. In conjunction with the Bible Society of El Salvador with support from American Bible Society, he created 3CadaDia. This daily threeminute video devotional is on Facebook, Twitter, You-Tube, YouVersion and some radio and TV shows. Since its inception last year, 3CadaDia has boomed in popularity, reaching more than 750,000 people in Latin America, the United States and Europe.

Langlois believes 3CadaDia is successful because “it challenges young people to take the risk to test God and trust in him for the best,” he says. “We need to give God an opportunity to speak into our situation.” A savvy entrepreneur, Langlois knew a few things about his audience and the market. First, he knew young people get their information mainly through social networks. And second, he knew that no other video devotional existed in the Spanish-speaking world. 3CadaDia presented an opportunity to share God’s Word in channels young people would take advantage of.

But Langlois needed a wow factor—a celebrity who would engage and captivate his audience. So he asked Emmanuel Espinoza, leader of the Christian band Rojo, to be the main speaker in the videos. Espinoza, who’s popular with youth in Latin America and the United States, enthusiastically agreed. During the videos, Espinoza reads a portion of Scripture, explains the implications for young people and invites them to reflect on it. The three-minute format is the right amount of time to get important messages across to audiences used to short bytes of information.

“You cannot go wrong with God,” says Langlois, who knows this from experience. At age 15, he was diagnosed with a severe heart malfunction that left him little chance of surviving. While many people prayed for him, he specifically felt his aunt’s prayers one night, he says. He woke up the next day feeling well. “Doctors couldn’t believe my heart was functioning normally,” he says. “After two years, they released me with a clean bill of health.”

This healing deepened his relationship with God. “The future is not certain, so you need an anchor, and hope in God through faith gives you that certainty.”

Langlois wants to share the Scriptures’ living hope with all who are willing to hear it. 3CadaDia is his lay of supporting the Bible Society of El Salvador in reaching people whose lives may be forever changed in just three minutes.

Delight Yourself in the Lord