Help and Hope for Haiti 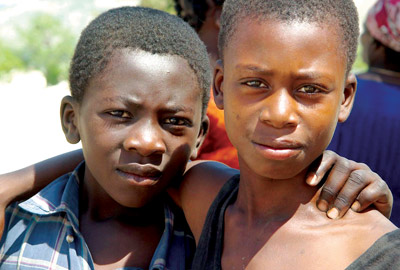 Operation Compassion, Water Missions International and ABS worked together to meet immediate needs for water after the earthquake in Haiti. Photo by David Singer

“I am asking God to give me strength I need to participate in [the reconstruction] of my country. We have to rebuild it,” declared Magda Victor, general secretary of the Haitian Bible Society.

The most immediate physical need was clean water for drinking, cooking and sanitation. In partnership with Operation Compassion and Water Missions International, the American Bible Society helped 50,000 gallons of water to be delivered.

But, only God's Word can bring comfort and hope. Along with the water, the American Bible Society joined forces with OneHope, Back to the Bible, and Faith Comes by Hearing® to help support the Haitian Bible Society to get 200,000 copies of the Scripture Portion, God is Our Shelter and Strength, and 3,000 Audio New Testament Proclaimers™ to those suffering. And for those who lost their Bibles in the earthquake, ABS sent 50,000 French and Haitian Bibles to be distributed within two months of the disaster.