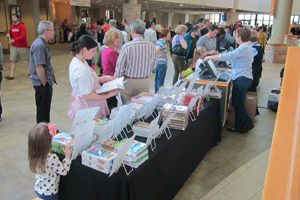 Willow Creek, one of the largest and most influential churches in the United States, recently invited American Bible Society to its first Bible engagement fair, which took place March 24-25. ABS staff members were on hand to showcase its plethora of Bible resources and tools, including the E100® Bible Reading Plan. Even more important, nearly 20,000 Willow members had the opportunity to commit to daily Bible engagement through the Uncover the Word™ movement. *

After Willow's three services, ABS staff members and Willow volunteers were available in the church's lobby to walk congregants through the different engagement resources. Those who attended the fair expressed their excitement about the kinds of tools available for Bible engagement. Newer believers who were unsure about how to jump into reading the Bible gravitated toward the E100 reading plan, while others marveled at the array of digital resources, such as Scripture-based Journeys.

With Bible engagement in the United States at an all-time low, the Uncover movement holds great promise. Now, with the second largest church in the United States embracing Uncover the Word, there is potential to gain an unprecedented amount of momentum. “The magnitude of introducing the movement to 20,000 people is encouraging,” said Sam Slusser, project specialist for Bible Engagement Resources at ABS. “There are so many lives that Willow touches… those who listen to the sermons online or who interact with Willow in other ways.”

Find the Bible engagement resources that are right for you and learn more about Uncover the Word.


* Uncover the Word is a national movement of people who are committing to the daily practice of Scripture engagement. Uncover mobilizes people everywhere to move together toward a fresh discovery of God and his Word so that they are personally transforming into the likeness of Christ and positively impacting culture.

Vickie and Lamar Vest giving outGod is Our Shelter and Strength at Ground Zero. (Photo...