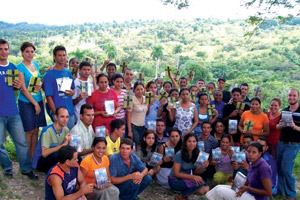 Like the mustard plant, the church in Cuba has taken root in this lush Caribbean nation. It was anything but easy in what had been an atheistic culture, where the church struggled to survive for many years.

In the 1990s, the culture officially began to become more tolerant of religious belief. This paved the way for believers to openly express their belief in God and stimulated the spiritual hunger of many of Cuba's 11 million citizens.

The Catholic Church is the predominant group of believers, but evangelical denominations are also flourishing. Hundreds of thousands of Christian Cubans make up the island's 56 Protestant denominations. Casas cultos — or house churches — are thriving. These fledgling Christian communities, some with up to 300 members, are cropping up everywhere.

Reaching Young People
The Biblical Commission of Cuba (BCC) is legally authorized to provide Scriptures in Cuba. For many years, BCC has distributed Bibles, New Testaments for children, manuals for Sunday School teachers and other Scripture resources for the Church. BCC collaborates with different denominations in the dissemination of these materials. BCC seeks to assist the church in reaching out to youth, defined as those up to age 30.

“In these times, we are confronted with the reality that youth do not attend church because the world lures them with other things. But, childhood is an important stage in the life of each Christian,” says Alain Montano, general secretary of the BCC.

Montano is excited about the chance to reach a group that so desperately needs God's Word. But getting Bibles into their hands is a challenge because they must be imported, and they are relatively expensive at an average cost of $8 each. the H20 Bible, published by United Bible Societies, is popular among youth in Cuba.

BCC has government permission to print the book of Proverbs locally. “If our youth can learn what's covered in Proverbs, they can know God,” he says. “Proverbs provides a good foundation for youth to have a life model and to know Christ.” Still, he longs for the day when he can place a Bible in the hands of every young person who wants one.

And the church needs to be poised to help them. To do that, Montano is putting God's Word into the hands of pastors, deacons and Sunday School teachers. But these teachers simply cannot take their copy and keep it to themselves. Instead, they must pledge to disciple others in the Word. Like the mustard plant, the church is spreading its branches to all who want to nest there.

The Bible at work in Russia