“Tears well up as I recall that moment.”

With Hero Squad, military families are not alone. 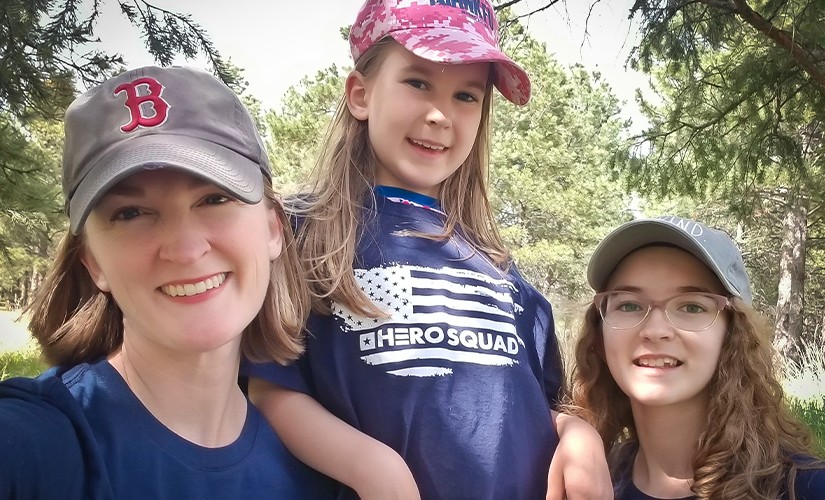 The family of four had just relocated to the new town that would be their last military-related transfer. Danita’s husband was to retire soon, so the couple often dreamed about the things their family would do together in the future.

Six weeks later, Danita’s husband died suddenly, leaving her and their two daughters to grieve in an ambiguous state between active military, retired military, and unknown.

“We were still house hunting, church hunting, and looking for schools,” Danita said. “We had no community yet, and I felt completely isolated as I entered into the hardest days of my life.” That sense of isolation was compounded when the pandemic began just a few weeks later.

The waves of trauma and grief made everything harder. Danita recalls that even reading the Bible her husband had given her on their wedding day “was like staring at a puddle.”

Thanks to our friend, renewed hope arrived in a camouflage-colored cardboard box from Hero Squad. Created by our Armed Services Ministry, Hero Squad is a unique Bible-engagement program specifically developed for military families. The boxes contain age-specific Bibles for each child, and one for their caretaker, as well as devotionals relevant to military culture, and more.

Even now, tears fill Danita’s eyes as she talks about the moment the first Hero Squad box arrived at her door: “We felt seen for the first time in months.” Her girls love the devotionals, and the new Bible Danita received is easier to read and less threadbare than her other Bible. They even use the boxes to hold keepsakes and mementos of their dad. “Hero Squad has kept us feeling like we’re still part of the military family and connected to my husband and the legacy he left.”

Thank you to our generous friends for helping make sure that not only our military — but also their families — can experience the hope and healing found in God’s Word.

“God’s Word . . . ministered daily to me in the minefields.”

Inspiring courage and peace for our Troops through God’s Word.