The Celebration of a Generation

The Datooga of Tanzania Rejoice Over God’s Word 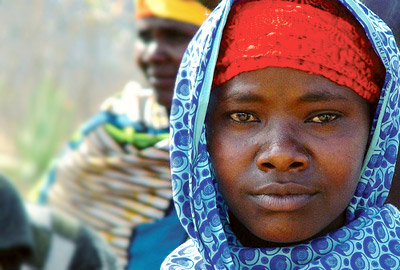 A Datooga woman at the Bible launch. Photo by Gregory Fisher, Hosanna Ministries/FCBH.

The walls inside the tin-roofed and rough-hewn yellow brick church were draped with colorful flags. Generators pumped a steady hum to power the keyboard, speakers, microphones and rotating fans. A crowd of around 300 dressed in plaid regalia and multicolored dresses pressed in along the narrow wooden benches that ribbed the nave of the church. People in plastic chairs — some three and four deep — lined the circumference, leaving standing-room-only for nearly a hundred more still entering. And those who couldn't fit leaned in at the open-air windows, eager to be part of what was taking place.

This was perhaps the most important event for the Datooga people of Tanzania in a generation: the launch of the New Testament translated into Datooga. On Sunday, Oct. 4, 2009, the occasion brought together Tanzanians from all over the country to celebrate an accomplishment that took communal determination and 24 years to complete. They were translators, doctors and generations of families — mostly Datooga tribespeople. Conducting the service were Tanzanian Catholic and Protestant bishops, some donning red and white mitres. They spoke and read Scripture in Swahili, English and Datooga.

To join in this celebration, an American Bible Society team traveled from Nairobi, Kenya, to Dodoma, the arid center and capital of Tanzania where the Bible Society of Tanzania (BSTZ) is headquartered. There they met the Rev. Dr. Mkunga Mtingele, general secretary of the BSTZ, and his colleagues, and added them to the traveling team. The final destination was the church grounds in a remote area called Basotu, near Lake Basotu. The group arrived early. It was a sunny, blue-skied day that would become quite hot.

The service began slowly and respectfully with speeches and readings from Scripture. The celebrants read John 3.16 in all three tongues. Halfway through, the white-haired matriarch of a Norwegian family, the Olsons, that came to Tanzania in the early 20th century to set up a missionary hospital, stood and said to a hushed crowd, “Today I want to say one thing: today the wall is broken.” After this, a celebratory cry broke out. All those of the Datooga tribe that she and her family had ministered to at the Haydom Lutheran Hospital, which doubles as the center of the Datooga community were finally free to learn God's Word and know the one true Lord Jesus Christ. 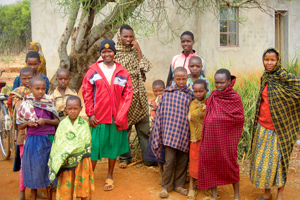 Photo by Liz Smith.
Tanzania and the Datooga

On the coast of East Africa facing the Indian Ocean is Tanzania, a country incorporated in 1964 by the joining of mainland Tanganyika and the island of Zanzibar. Three major lakes line the boundaries along the north and west, and in the northeast sits Kilimanjaro, the tallest mountain in Africa.

Religiously, mainland Tanzania is approximately one-third Muslim, one-third Christian with the rest following indigenous, animist-based African religions. The Bible Society of Tanzania is very active, and in 2009 some 328,000 Bibles were distributed within the country. That amount is expected to rise to 400,000 by the end of 2010.

The total population of 40.5 million people includes more than 132 tribes, or ethnic language groups, and the majority live on the country's periphery. Ironically, the capital Dodoma is in the hot, arid center of the country. In an even more remote town called Haydom, in Mbulu District, is the heart of one of the smallest nomadic tribes, the Datooga. They number some 90,000 to 100,000 people and only exist in Tanzania. The tribe consists of 12 subgroups that speak various dialects but not Swahili or English, the country's official languages.

The Datooga practice a traditional African lifestyle that revolves around the day-to-day feeding of their family and caring for their livestock. Until the first half of the 20th century, the tribe was nomadic, traveling on foot to wherever they could find food and water. By the mid-20th century, the Datooga were settling into family communities from which they would continue to migrate, but return. The animals — cows, sheep, goats, pigs and chickens — are perhaps a family's most important commodity and are held in the highest esteem for their power to sustain life.

At night, the animals are kept in the center of a family's mud and straw hut compound in an improvised cage of Acacia thorns and straw and guarded by dogs. Some families bring their animals inside the huts for the assurance that they are safe.

Creation of an Alphabet

The work of the Datooga Bible translation began at the very beginning — with the invention of a written Datooga alphabet. In 1985, the process of creating letters and words for what had only been spoken began. This required a careful harmonizing of several Datooga dialects into one language that all Datooga could understand and accept. Working with Datooga locals, two missionaries from the Evangelical Lutheran Church of Tanzania began the process. Later, in partnership with the Summer Institute of Linguistics and the United Bible Societies, a couple of translation consultants, trained in Hebrew and Greek, went to work on the translation. In all, some 20 Datooga men and women were involved in translating and testing the Datooga New Testament over the 24 years it took to complete.

One who lasted the whole stretch is the perpetually smiling Pastor Joseph Maho, 59. The day before the launch, sitting outdoors at a round wooden table under a thatched roof, Joseph, in a quiet but excited voice, spoke about his experience. “Being in the Word every day has been very powerful — to see the power of God at work,” he said.

The beginning work took place in a tiny, one room building on the grounds of Lake Basotu. That building was used until 2007, when the effects of El Niño caused a flood, rendering the building unusable.

Joseph picked up the work in another office in the village of Basuto. Now he is working on finishing the translation of the Old Testament. Each time he would translate a verse, he said, he would read it back and could feel the Lord helping him do the work of making it right. All through this painstaking process, his key verse was John 15.4b: “A branch cannot bear fruit by itself; it can do so only if it remains on the vine. In the same way you cannot bear fruit unless you remain in me.” (GNT) (Realizing the Lord is alive in his Word has been a profound experience.) He said, “I am grateful that I . . . will see my own people hear the Word for themselves in large numbers.” 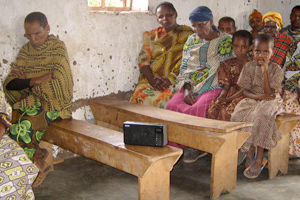 Inside a Lutheran Church in Getarer, TZ, amid the people of an Iraqw tribe, a Bible listening group gathers to hear God's Word. Recording the Scriptures into audio format so that they can be listened to by non-literate cultures is vital to the spread of the gospel. The Faith Comes By Hearing® Proclaimer™ goes to the remotest corners of the world. It is equipped to run on electricity, battery, solar power and when all else fails, by hand crank.

In this setting this group had started listening when the Proclaimer ran out of energy and had to be placed outside on a rock with its solar panels facing the sun. But it was overcast, and soon a leader brought the Proclaimer back inside and placed it on his lap and began turning the hand crank on the side of the device. Out came the gospel loud and clear for as long as he could crank it.

Gregory Fisher, regional manager for Africa, Hosanna/FCBH, said that they are more than halfway through the recording of the Datooga NT for listening groups.

Bible Translation Around the World in 2020