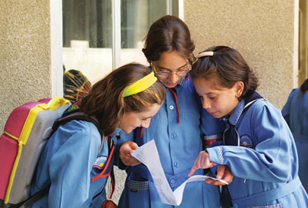 Across the region where Christ proclaimed his message and was resurrected, the Word is taking hold and transforming lives. In this traditional world, children from across the Middle East have new opportunities to hear and experience his message of hope.

Swirling minor notes from a flute evoked the atmosphere of a souk, or marketplace, from Bible times — the kind of unfamiliar and haunting air Salome might have danced to. Pedro Eustache, who played woodwinds for Mel Gibson's Passion of the Christ, was performing at the American Bible Society's fourth annual Bible Summit. With his music resonating through a room draped to suggest a jewel-colored Bedouin tent, participants were transported from the Hilton Hotel in New York to the worlds of the ancient and the modern Middle East.

Sometimes working in that region means asking, “Am I ready to die for the message that is in the Bible?” Key ministry leaders gave their answers to that question. The Global Bible Summit was a rare opportunity for them to share stories from the front lines with American Bible Society supporters.

Muslim countries operate very differently from the U.S., and that can be a good thing, according to Ramez Atallah, general secretary of the Bible Society of Egypt (BSE). Just imagine, he asked listeners, a place where the government prohibits pornography, and where children can walk down the street at 1 a.m. and be completely safe. “We have morality laws that are just as strong as the civil laws. This is one of the most important differences in Islamic culture,” he says. In a sense, his compatriots, Christian and Muslim, live in a much more god-fearing world.

Christian proselytizing is not allowed in Egypt. Advertising is, however. Newspapers and billboards on highways are all used to promote the Scriptures. Many first heard about Kingsley's Meadow, a popular cartoon about a lion created by the American Bible Society, through a billboard (see page 12). The curious are then directed to BSE shops, which sell videos of “Kingo” and many other items. (One BSE booth is at a gas station en route to Alexandria.) Ramez feels that the image of a commercial enterprise gives the BSE legitimacy and currency. Through Bible outlets, the BSE is able to distribute about 3 million items a year, through 150,000 sales transactions.

The seven countries of the Arabian Peninsula face different challenges. According to Hrayr Jebejian, general secretary of the Bible Society in the Gulf (BSG), many people come there to work in its more affluent areas. On average, 65% of the total populations are expatriates from more than 50 countries. Many of them are migrant workers. Without rights in a foreign land and generally with little education, these workers are often isolated and lonely.

The BSG compassionately provides opportunities for them to learn the Word of God, build relationships and find hope not only for themselves but also for their families back home. In the booming economy of Dubai, for example, the Bible Resource Center has multimedia materials and Bibles in 40 languages. Hrayr has also been a Bible Society consultant for other countries in the region. “When God is in our heart, every place is home,” he says.

Hope in the Face of Danger

Immersed in one of the most difficult situations in the world, Labib Madanat serves as general secretary of the Bible Society of Palestine (BSP). The manager of its bookshop in Gaza was murdered last October. Although the bookshop had endured other acts of violence, this was a devastating blow. Many Palestinians rallied in protest. At the Summit, Labib said that non-Christian women came to mourn, and Messianic synagogues expressed their shock. The BSP was always a welcome presence in the neighborhood. Labib asks if there is enough in the Bible to speak to every culture. The answer is yes. “No one is too dirty for the blood of Jesus Christ; we do not require preconditions for our serving,” he says.

Lebanon is the only Arab country where it is legal to change religions. Evangelism is permitted there. Yet within the past 100 years, the Christian population in the Middle East has dwindled from 25% to less than 5%. Christians face persecution even here, despite the relative openness of the country, according to Michael G. Bassous, general secretary of the Bible Society in Lebanon (BSL). Last summer a bomb exploded near the Bible Society Center in Beirut. Yet, in the face of violence, hope grows.

The BSL is one of two Bible Societies (the other is the BSE) that produces Scriptures in Arabic. A current project is helping the Beirut Bookshop and its lending library distribute some 164,000 Scripture items.

The BSL also oversees work in Syria and Iraq. A Bible Society presence has been established in a safe Baghdad neighborhood since 2003. Important ministry through drama is making a deep impression on children there. The Kurdish government has given the BSL permission to open a Bible Center in Northern Iraq. The Bible Society is the only organization with that kind of access.

“The Middle East is the place where God chose to manifest himself to mankind. It is where it all started — and where it will all end,” Michael says.

“King” of the Road

On a busy highway in Cairo, Egypt, billboards advertise the “Kingo” children's video. Kingsley’s Meadows was conceived and produced by the American Bible Society, but the friendly lion cartoon character is a household name only in Egypt.

The billboards provide visibility for the Christian minority in Egypt, drawing Christians to learn more about their faith. Ramez Atallah thinks Kingsley's Meadows is one of the best children's videos ever produced, as it introduces ethical and moral issues that are common to all people.

In addition to the billboards, the BSE is raising funds for a year of advertising along the highways and in Cairo's subways, the only subway system in Africa and the Middle East.

Pray that the requests from the Bible Societies of Angola, Egypt, Republic of Georgia, Israel, Arabian Gulf States and Philippines will be answered

In the Potter’s Hands