“We lost everything, but we found God.”

Bibles sent to Ukraine are a beacon of God’s faithfulness. 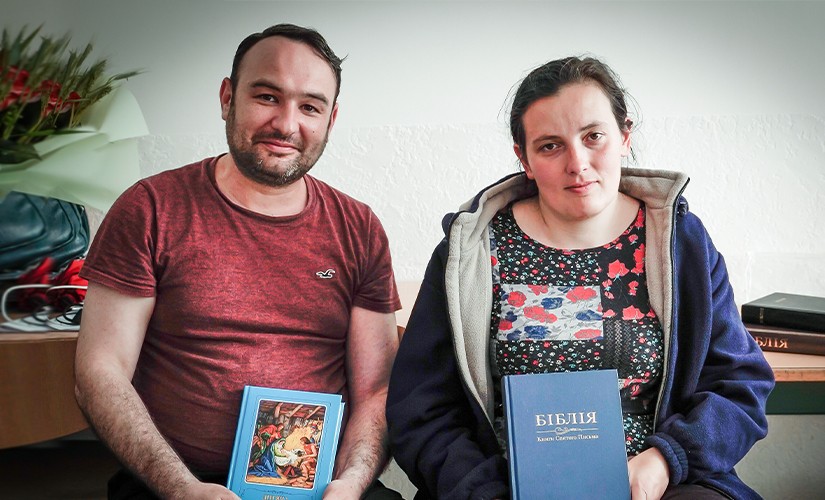 Petro* and Nadiya* have lived with the terrors of war since 2014, when Russian-backed troops invaded the area near their home in the Donetsk region of Ukraine. The events that followed so deeply traumatized their then 2-year-old son, Maksym*, that he stopped speaking.

The family fled to Mariupol. They purchased the only house they could afford and spent the next eight years renovating it. The family of four finally moved in this February, just days before the devastating Russian invasion began. For the three terrifying months that followed, they lived in the tiny five-by-seven foot cellar, cooking over an open fire during breaks between shelling.

One day was like a year,” Petro shared. “You want to sleep all the time because you are so tired. Bombs are exploding all the time. You hear windows rattling, and the lid of the cellar too.”

When Mariupol fell, the family fled to Lviv. The generosity of our friends helped place Bibles in Petro and Nadiya’s hands soon after they arrived. Though they were not believers at the time, they soon realized that God had been protecting them on their journey to safety.

Both came to faith in Christ after they began reading the Bibles they received. Nadiya says, “What touched me most is the story of Abraham. There were so many situations where God intervened and helped him. God didn’t abandon His people.” She adds, “As you read the Bible, the wound in your soul becomes smaller.” They both agree, “The most important thing is not the fact that you lost your house, your material belongings — everything — the most important thing is that we found God.”

The commitment our of generous partners to sharing God’s Word is changing lives for eternity. The Bibles provided are making the faithfulness of our God known to those in urgent need.

“Everyone wanted the Bible!”

In Ukraine, One Girl Found Hope in Tragic Circumstances

Iaroslava clung to God’s Word amidst abandonment, addiction and poverty