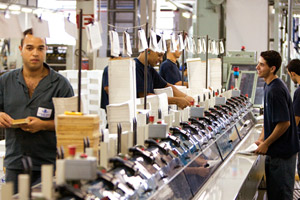 Bibles in production at the Bible Society of Brazil's printing facility in Sao Paolo. Photo by Andrew Hood.

ALBANIA: Free Coffee and New Testaments Bring About a Conversion
The head of the Bible Society of Albania recounted his conversion story to American Bible Society staff at a recent meeting. Altin Hysi grew up in Communist Albania during the era when it was officially atheist, and in 1991, at the age of 21, he fled Albania along with many others. Just outside the refugee camp in Austria where he landed was a place run by missionaries who were offering free coffee and New Testaments (NT). It was the first time Altin had ever had a copy of the NT in his mother tongue. “The Bible had not been allowed in Communist Albania — and perhaps because of that I started to read it!” he says. “To my surprise, the words made a special impact on me,” especially Matthew 5. After two years of schooling, Altin took in the words of the principal of his Bible school that “Albania needed Christians” and went home. Now, as the leader of the Bible Society of Albania, he asks for prayer for the completion of the Old Testament translation. “It's difficult,” he says, “because the translators are far aflung.”

AUSTRALIA: Aboriginal Communities Receive the CEV Bible
Close to 500,000 people make up the remote and Aboriginal communities of Australia. They speak up to 143 languages, including English. But low literacy levels make it difficult for many of them to read God's Word, and only one complete Bible in an Aboriginal language exists — the Kriol Bible, published in 2007. American Bible Society's Contemporary English Version text was chosen to make the Easy Reading Family Bible accessible. With the new Easy Reading Family Bible, launched in November, Aboriginal communities have an opportunity to engage with God's Word. The text was enhanced to include large print, Christian living helps, colorful resources (dictionary, concordance, encyclopedia, guides and maps), and Aboriginal artwork. “Translation projects help even the quiet members of a community to be involved in kingdom building. They often develop ministry skills and rise to being leaders in the church,” said Peter Greenwood, Uniting Church translator. The new Bible gives indigenous people a voice and affirms them as people who have value.

BENIN: In Benin, a Bible is Presented to the Pope
The Bible Society of Benin, along with church and government authorities, presented his holiness Pope Benedict XVI with the first copy of the Bible in Fon. The Fon people, who number approximately 1.7 million, live mostly in Benin. After waiting many years for the Bible in their language, the Fon people were exuberant in expressing their gratitude to the Bible Society for the translation.

BRAZIL: A Fruitful year
Last year was a fruitful year for the Bible in Brazil. In May, the Bible Press reached the mark of 100 million Bibles and New Testaments, produced in just 16 years. The Bible Society of Brazil distributed, in 2011, a total of 6,783,255 full Bibles to the Brazilian people (14.54 percent above the 2010 distribution). This alone is a record.

CHILE: Gypsies Come to Christ
Chile is home to some 5,000 Romani-speaking Gypsies, many of whom are becoming followers of Christ. They have the New Testament, but work continues on translating the Old Testament into the Romani language, which should be completed in 2016.

DEMOCRATIC REPUBLIC OF THE CONGO: Testimony of Healing
“I’m one of the participants concerning the trauma healing organized at Bukavu by the Bible Society who has benefited much,” said the Rev. Ghislain Bafunyembaka Nakabenge. “It was too difficult for me to forgive those who killed Congolese people, including 36 persons from my own family during the war of 1996-1998 in our country. Since that bad event, I became a person living with trauma and without joy. . . . Since [then], I began to consider that all the people from the countries who attacked and destroyed our country . . . were criminals, and I decided to not be in good relationship with them forever. I started to be angry with God and began to consider him as a God of injustice who encourages criminals to kill people and to make disorder without punishment. I started to believe that Congolese people were under a curse from God, and that is why we were living in poverty, even if our country is full of many natural resources. But I can say glory to God because when I got teaching from your organization about the trauma and how to be healed from it, my life has changed and I decided to forgive all the enemies of my country and my family and asked God to forgive me and to transform my life. Since then, I'm involved [in helping] other leaders of churches and people to be healed from trauma, and I have helped up to 19 persons. So may God bless your ministry.”

The Rev. Nakabenge is president of Protestant Revival Churches in South Kivu and president and founder of Good News For All Nations Ministries, which is involved in leadership training, counseling as well as assistance to orphans and other children at risk.

RWANDA: Bibles for Genocide Survivors
Though it has been 18 years since the 1994 Rwandan genocide, people there are still deeply scarred. Many young people witnessed some of their 800,000 countrymen killed in the span of 100 days. In an effort to help the healing process, American Bible Society and the Bible Society of Rwanda are providing Bibles to 10,000 students in 25 Catholic schools. The project will also reach out to 4,775 young people who are no longer attending school.

Partnering to Eradicate Bible Poverty
American Bible Society is partnering with Operation Christmas Child-USA (OCC) to provide God's Word in 12 countries. This will be life-changing for children who have little or no resources or education across Africa, Asia and Central and South America. ABS and OCC will distribute New Testaments to graduates of the OCC discipleship program, “The Greatest Journey.” Some 412,000 children are expected to study God's Word and encourage their family members to do so.

“I will be coming alongside ABS teams to invite American Christians to make...