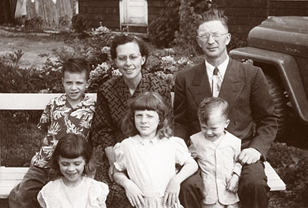 Elizabeth and William Sedat with their four children. Photo courtesy of Elizabeth Sedat

Elizabeth Sedat grew up in a godly home in California, around stories of the missionary life. Her mother had been a short-term missionary in Japan. Other missionaries were always visiting. And at the tender age of 12, Elizabeth felt the call — that this work would be her life's goal, too.

A few years later, a woman missionary in Guatemala providentially came to their home on furlough and stayed for a year. Years later, after she finished college, Elizabeth received an invitation from that woman to come to Guatemala for a year. When she arrived, she drew on her musical education and organized a music program — playing and teaching the pump organ for the local church.

During her stay in Guatemala she was introduced to William Sedat. He was translating the Bible for the Kekchi tribe. When it was time for Elizabeth to return to California, William asked if he could have permission to write to her. While Elizabeth studied for a double master's degree in English literature and education, William's letters began to trickle in, then arrive steadily. Then one day he proposed. She accepted.

This meant a return to Guatemala, where they were married in a Presbyterian Church and eventually raised four children.

The Sedats lived in the heart of Kekchi Indian country. Elizabeth began to learn translation theory and practice; she was determined to be a missionary wife, not a missionary's wife. In 1961, another tribe, the Pokomchi, contacted their mission council to ask for assistance in acquiring Scriptures in their language. So William and Elizabeth and the Pokomchi helpers began a translation of the Pokomchi New Testament. During these years Dr. Eugene A. Nida of the American Bible Society — one of the most influential Bible translators of the 20th century — was the Sedats' frequent houseguest and became a good friend of William's.

Elizabeth's childhood was also shaped by her mother's wise money-management principles, which included a 10 percent tithe (Elizabeth first applied the tithe to her allowance). Now, at 92, she continues to give to God by sharing her inheritance, through a gift annuity and life income arrangement, with the American Bible Society. This way she is able to achieve both her personal income needs and her desire to advance the Bible cause, while continuing to support other Christian work.