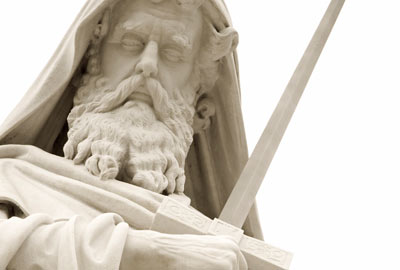 The statue of st. Paul in front of the Basilica of St Paul Outside the Walls

In June of last year, Pope Benedict XVI inaugurated the “Year of Saint Paul,” to span June 28, 2008 through June 29, 2009. Catholics were called to remember, learn about and reflect upon the person and the work of the Apostle Paul, according to Mario J. Paredes, the American Bible Society’s Special Envoy to the Catholic Church. ABS was involved in several events at Bible House and at the University of Notre Dame.

May 6 and 27: Paul of Tarsus: His Faith, Mission and Relevance

At the first American Bible Society and Crossroads Cultural Center-organized event, on May 6, more than 250 Catholics from the Archdiocese of New York came to Bible House for “Paul of Tarsus: His Faith, His Mission, His Relevance Today.” Father Peter Cameron and Archbishop Charles Chaput spoke about the Apostle's faith and unique role in the diffusion of Christianity.

Father Cameron, editor of Magnificat, told stories that brought Saint Paul to life. The Archbishop of Denver Charles Chaput exhorted Catholics to follow the example of Saint Paul by understanding their own times and being “possessed by the God of Truth.” He advised Catholics to spend “One night a week . . . reading, talking with each other, listening to each other and praying over Scripture.”

At the May 27 ABS-Crossroads Cultural Center event, Bible House welcomed Msgr. Lorenzo Albacete and Daniel Cardinal Di Nardo, of Galveston-Houston, to speak about the relevance of Paul's teachings in the catechesis of Pope Benedict XVI. Bishop Di Nardo spoke about what it means to be Catholic in modern America, relating to Paul's Letter to the Romans.

General Secretary of the Synod of Bishops for the Vatican Archbishop Nikola Eterova­c made two presentations at Bible House on July 28, one for ABS staff on the Mission of the Synod, and the second, for Catholics in the New York area.

The “2009 Camino a Emaús Conference,” organized by ABS and the Cushwa Center for the Study of American Catholicism, at the University of Notre Dame in South Bend, Ind., drew more than 300 people. Francis Cardinal George, of Chicago, inaugurated the conference of ecclesiastical, pastoral and scholarly leaders designed to explore and promote God’s Word among U.S. Hispanic Catholics. Archbishop Nikola Eterovíc, general secretary of the Synod in Vatican City, provided insight into Pope Benedict XVI's motivations for Scripture engagement.

Cardinal George noted that the context of biblical texts is crucial when reading the Bible, and he also praised ABS's Lectio Divina initiatives, biblical translations, as well as their creative ideas throughout the world.

Silas Anamak is looking forward to having the Bible in his own language. Northern Cameroon, ...