“I had no money to buy the Bible.”

Dreams come true for a woman in Uzbekistan who was ready to copy the Bible by hand. 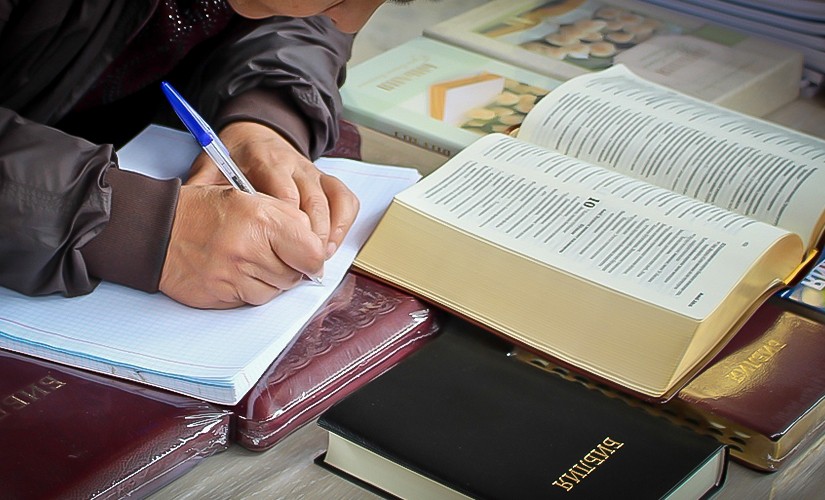 Can you imagine not knowing that God speaks your language? In Uzbekistan, less than one percent of the population (of more than 33 million people) is Christian, and the majority of those believers only speak the Uzbek language. But until 2016, there had never been an Uzbek language Bible!

Since that time, more than 13,000 Uzbek Bibles have been distributed, but that initial supply was quickly depleted. Those first Bibles were intended to reach Uzbek Christians like Olma*, who had been waiting for the Bible in their heart language for many years, even while enduring persecution and harassment.

Olma lives in a rural area of Uzbekistan. For more than 15 years, she has faithfully driven over 100 kilometers (about 62 miles) to attend church services. She has always dreamed of the chance to study the Bible in her heart language.

At church one day, she noticed a Bible laying on a table. When she opened it, she could hardly believe what she found. Her eyes were reading Scripture in Uzbek! Olma didn’t have money to buy the Bible, but what she lacked in funds, she made up for in determination. She took out her notebook and pen, opened the Bible to a random passage, and eagerly began writing down the words as fast as she could!

Our team soon took notice and, after asking about her circumstances, we presented her with an Uzbek Bible of her own. Olma said, “I had no money to buy the Bible. So, when the Bible Society said they will give me the Uzbek Bible for free, I was overjoyed.”

For believers like Olma, having a Bible in their own native language has a tremendous impact on their faith and spiritual growth. Additionally, it better equips them to reach their unreached family and friends. Thank you to our partners for making dreams come true in this life-changing way.

A Bachelor in China Finds Contentment Through God’s Word

“I am a bachelor and God’s Word is everything I have… I am content.”

The Seed Falls on Good Soil

100 years of good news in Korea

How God Appeared to a Poor Farmer and his Family

In Central Asia, an audio Bible transformed one man and his family forever.