In the Wake of a Tornado, One Woman Clung to God’s Word

How a chair, an ottoman and a Bible-reading routine offered hope in tragic circumstances

Last fall, a tornado carried pieces of Terri Whitworth's home into the Illiniois countryside, leaving her family scrambling for hope

Terri Whitworth knew she had to let go. As a tornado carried pieces of her home into the Illinois countryside, she squeezed her son’s hand—and then she pulled away, watching as her husband pushed him into the basement for safety. Terri and her husband followed.

...he had been preparing her for this moment—for the chaos, the anxiety and the fear—for quite some time.

Just moments before, Terri and her family raced into the garage and prepared to flee the oncoming tornado. But before they had time to escape, the tornado descended, forcing the family back inside. As they ran for cover, the wind tossed them in front of the basement door. In this moment, God provided safety. But as Terri would later discover, he had been preparing her for this moment—for the chaos, the anxiety and the fear—for quite some time.

A year-and-a-half earlier, Terri had listened intently as her pastor shared a message from American Bible Society, which explained the importance of “finding your chair”—of locating a place dedicated to spending time with God through the Bible. The very next day, Terri found her spot, a beloved reading chair situated inside her sunroom. Every morning, she brewed a pot of coffee, nestled into her chair and grabbed her Bible from a nearby ottoman. 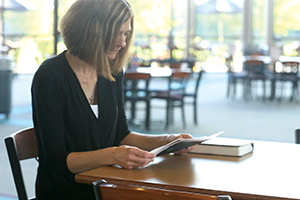 In the months that followed, Terri’s Bible-reading routine turned into an everyday lifeline. Shortly after listening to her pastor’s sermon, Terri said her final words to her father, who lost a battle with lung cancer. Three months later, she mourned alongside her husband after the death of his father. Then came the tornado. In the midst of grief and the aftermath of the tornado, Terri relied on God’s Word—and her Bible-reading routine—as a source of strength.

So when Terri finally emerged from her basement, and began to assess the impact of the tornado, she discovered an astonishing provision: her chair, ottoman and Bible survived the storm. “Everything that was on the left [side of the sunroom] flew out the window,” she explains. “But my chair and my ottoman were apparently still in the room…my Bible was still there.”

Today, as Terri recounts the tragedy, she smiles warmly with tears filling her eyes. Through the loss of loved ones and the destruction of her home, God’s Word offered peace, hope and healing. Terri no longer has a chair in her sunroom, but she holds tightly to her Bible-reading routine. Every morning, she sits on “a special end” of the couch, picks up her Bible and prepares for another morning with the Lord.

“He’s giving me hope. He’s giving me strength through his Word and I can feel his presence with me when I’m sitting in ‘my chair.’”

“I feel that you have to have a special place to go where you feel like you’re connecting with God,” Terri says. “He’s giving me hope. He’s giving me strength through his Word and I can feel his presence with me when I’m sitting in ‘my chair.’ So, I encourage people: find your chair, sit in your chair, read in the same place, because God will know you’re there and he will read to you.”

4 Ways to Give Generously to Bible Ministry This Prime Day