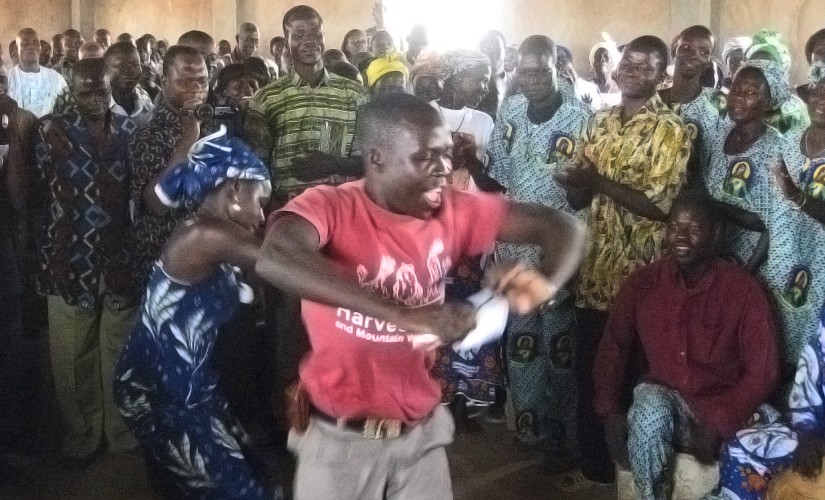 Drums beating. Voices raised in song. Beads clanking. Feet dancing to the beat. All of this could only mean one thing. Someone important, like a chief or a king, was arriving in this small Burkina Faso village.

But Maxime Bakiono, a local villager and a former leader of the Bible Society in Burkina Faso, knew it was the arrival of a different kind of royalty. The people gathered to celebrate the translated Word of God.

By completing Leviticus, the translation team moved one book closer to having the Bible in their heart language, Lyélé. On this day, the village turned out to celebrate the translation of the book of Leviticus.

“In Africa, when an important chief arrives somewhere, people sing his praises,” Maxime says. In West Africa, when the Bible is launched in a new language, it’s received with the same enthusiasm.

“Lyélé is my mother tongue, the language of my heart,” explains Maxime. “It’s the language I use when I talk to my mother, several times a week, to my younger brother, to my cousins, my uncles who are still in the village.” But to read God’s Word, Maxime must default to his second language, French. Being fluent in French, Maxime understands the words, but the core meaning of the text is lost because it’s not the language of his heart.

Thanks to American Bible Society’s financial partners that situation is changing. In three years, the 210,000 Lyélé speakers will have the full Bible in their heart language. Until that time, when each book is translated that portion is printed and distributed for use by Lyélé churches.

Having even a book or two of God’s Word in their heart languages can change people’s lives. In Leviticus, for example, Moses helps God’s people understand the infinite holiness of God. It’s one of many powerful lessons that can turn hearts toward God!

For people like Maxime, it’s hard to wait for something that millions of people already have. But just imagine the celebration that will take place once the Lyélé people have the full Bible — God’s Word in their tongue. As Maxime says, “When you celebrate the Word, you celebrate God himself.”

In Egypt, Bible Society Responds to Killings with Scripture

An Oral Bible translation rooted in music and storytelling is bringing God’s Word to life for a nomadic people group in Namibia.