“My life was changed.”

Liberian goes from enemy of God to witness for God! 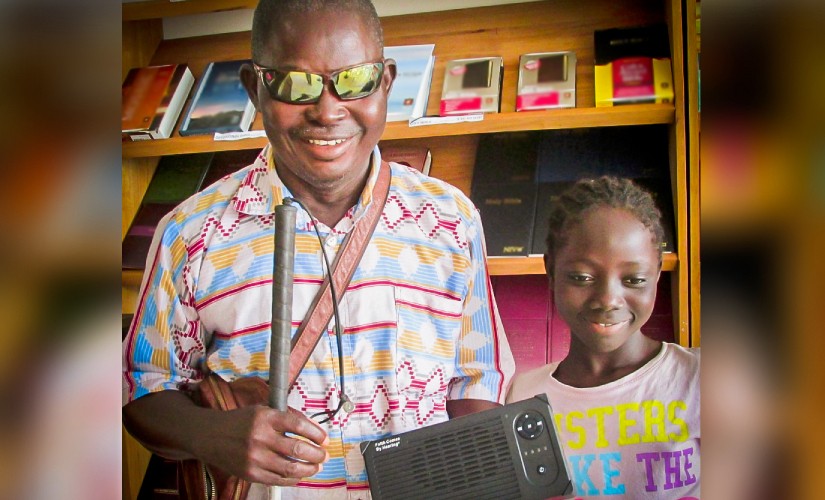 Life in rural Liberia was never easy for Lionel* and his family. They had no running water or electricity in their West African village. However, as a plantation worker, Lionel says, “food was always on our table.” Then, the bottom fell out of his world when a terrible accident left Lionel blind. “I became a street beggar,” he says.

Lionel wasn’t a Christian before, but his condition left him bitter and angry toward God. “I became an enemy to God,” he says.

“The story of my life changed when I was invited to a Scripture listening session to hear God’s Word.” After hearing audio Scripture provided by friends like you, Lionel’s life was transformed.

“I gave my life to Christ,” he explains. “My life was changed. I am no longer going to the street to beg, but rather going to witness to others. Now, I’m winning souls to Christ.”

The support from our financial partners has provided Lionel with an audio Bible of his own!

“I have been able to impact the lives of others by helping them interact with the Word of God, giving them the opportunity to know Christ,” he says. “The audio Bible is a blessing to my work as an evangelist. As people listen to it, I feel the change taking place in their hearts. Many people have been touched by this audio Bible, and any are asking for a listening group to be established in their communities.”

Lionel says Scripture has rescued many young people who are into drugs and prostitution. “You will weep,” he says. “I have four notorious ex-drug addicts who have given their lives to Christ just by listening and interacting with God’s Word.”

We are so thankful for our partners for transforming lives like Lionel’s in Liberia, West Africa, and around the world through the power of God’s Word.

A New Bible Translation in Kenya